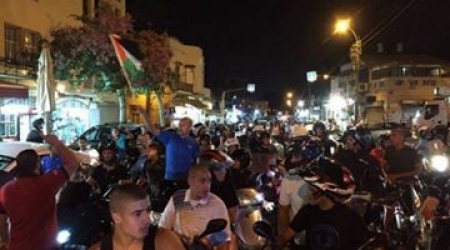 The youth movement in the occupied territories of 1948 declared the next Thursday as a rage day for the Palestinians masses.In this context, the student movement of the National Democratic Alliance called, in a press statement, for Palestinian masses to participate in the demonstration of the rage day in Nazareth city.

The movement assured, according to Al Ray, that this mass demonstration comes to support Al-Aqsa Mosque, and denounce the Israeli settlers’ crimes in the Palestinian territories, especially the execution of Palestinians in the West Bank and Jerusalem.

‘This demonstration comes to express our duty to our issues and to defend our freedom and our right to live in dignity on in the Palestinian land, the occupied territories of 1948, the West Bank and the Gaza Strip’, the movement said.

The alliance called in all the colleges, institutions and universities to participate in the rage day, and to gather in Nazareth city on Thursday.