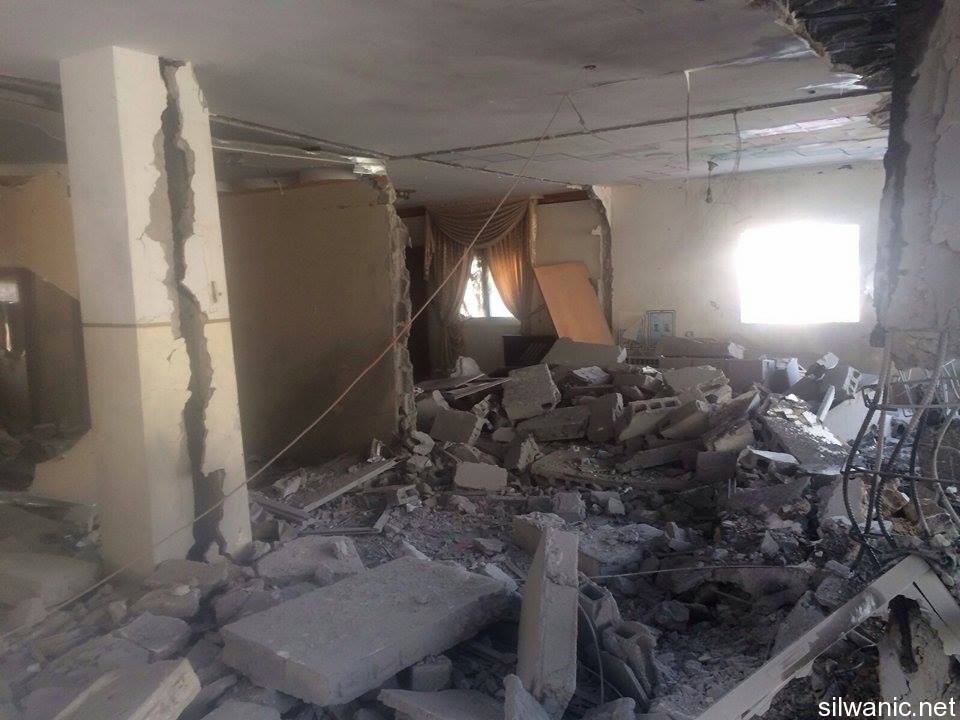 On Tuesday, Israeli troops demolished two houses in Jabal al-Mukaber Village, and filled a home with concrete in al-Thawri Neighborhood in Occupied Jerusalem. The homes belonged to families of Palestinians accused of attacking Israelis.Palestinian rights groups say the demolitions are part of the collective punishment policy practiced by Israeli forces against families of Palestinians accused of carrying out attacks.

They also filled a room with cement, in a house belonging to a family in at-Thoury neighborhood in Silwan village, south of the Old City.

The Palestinian Center for Human Rights (PCHR) condemned these crimes, which have been added to the series of crimes committed by Israeli forces in occupied East Jerusalem in particular and in the occupied Palestinian territory (oPt) in general.

According to an investigation conducted by PCHR, at approximately 00:30 on Tuesday, 06 October 2015, Israeli forces, including special units and intelligence officers, accompanied by explosive experts, moved into Jabal al-Mokabber village, southeast of occupied Jerusalem, while a helicopter was hovering overhead.

They raided two houses belonging to the families of Mohammed Ja’abis and Ghassan Abu Jamal.

The soldiers forced the occupants and 23 neighboring families to leave their houses while firing sound bombs and tear gas canisters to frighten them and prevent them from approaching the area.

Israeli forces then planted explosives inside the two houses and remotely blew them up.

As a result, the two houses were completely destroyed, while other houses sustained serious damage. It should be noted that the 110-square-meter house of Ghassan Abu Jamal used to shelter his wife, Nadia, and their 3 children, while the house of al-Ja’abees is located on the second floor in a 2-story building.

In the same context, Israeli forces raided in the early morning a house belonging to Mo’taz Ibrahim Khalil Hejazi in at-Thouri neighborhood in the south of East Jerusalem. They surrounded the house, closed its windows with iron plates and then poured concrete in his room.

– Mohammed Nayef Ja’abis (21), from Jabal al-Mokabber village, was killed on 04 August 2014, when Israeli forces fired over 21 bullets at him from a close range after the bulldozer he was driving hit a bus on Street no. 1 opposite to Sheikh Jarrah neighborhood. Ja’abis was at work at the time, and eyewitnesses say the bulldozer had an accident, but Israeli forces claim that he carried out an attack against the bus.

– Former prisoner Mo’taz Ibrahim Khalil Hejazi (32) was killed on 30 October 2014, when Israeli special forces opened fire at him while he was surrounded on the roof of his family’s house in at-Thouri neighborhood in Silwan village, under the pretext that he opened fire at Rabbi Yehuda Glick, west of Jerusalem.

Ghassan Mohammed Abu al-Jamal (32) was killed along with Odai Abed Abu al-Jamal after carrying out an attack on a synagogue in ‘Har Nov’ area in Deir Yassin village in occupied Jerusalem. Israeli forces closed Odai’s house with concrete in July.

PCHR reiterated its condemnation of the destruction of the two houses and closure of a room, which are part of the collective punishment policy adopted by Israeli forces against the Palestinian civilians.

PCHR reminded Israeli authorities that article 33 of the Fourth Geneva Convention provides, ‘No protected person may be punished for an offence he or she has not personally committed. Collective penalties and likewise all measures of intimidation or of terrorism are prohibited’.

Therefore, PCHR calls upon the international community to take immediate and effective action to put an end to such crimes and reiterates its call for the High Contracting Parties to the Fourth Geneva Convention of 1949 to fulfill their obligations under Article 1; i.e., to respect and to ensure respect for the Convention in all circumstances, and their obligation under Article 146 to prosecute persons alleged to commit grave breaches of the Fourth Geneva Convention.

According to the PCHR, these grave breaches constitute war crimes under Article 147 of the same Convention and Protocol I Additional to the Geneva Conventions.