UPDATE: 17 Palestinians, including Minors, Kidnapped in West Bank; Over 90 Injured 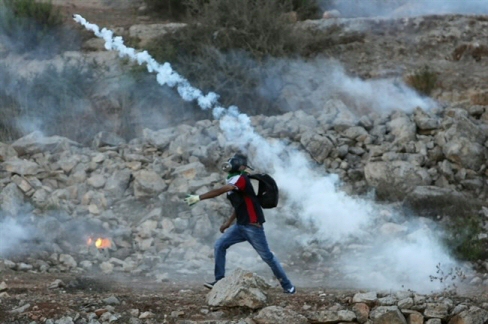 Israeli forces, Tuesday, abducted 17 Palestinians from across the West Bank, including minors, according to local and security sources. At least 90 Palestinians have been reported injured in clashes with Israeli soldiers and settlers.WAFA reports that Israeli police attacked the funeral procession of Fadi Allon, who was shot and killed by Israeli forces in cold blood outside the Old City in Jerusalem, held in the town of Beit Hanina to the north of Jerusalem.

Forces fired tear gas canisters and stun grenades toward locals who participated in the funeral. However, no injuries were reported. A Palestinian youth, whose identity was not verified, was detained during the attack.

In Hebron, forces abducted three brothers from the town of Beit Owwa to the west, while they driving near the town of Dura to the south; where clashes purportedly erupted between Palestinian locals and Israeli soldiers. They were identified as Qusay, Oday, and Abdallah Masalmeh.

Forces further abducted two other locals, including a blind and deaf minor, from the Hebron area.

The ex-detainee was taken to a military camp inside the Israeli settlement of Karmi Tsur, built illegally on Palestinian-owned land.

Forces also set up military checkpoints at the northern entrance of the city of Hebron, as well as at the entrance of Sair town, where they proceeded to search and inspect the identity cards of passing Palestinian registered cars.

Meanwhile, forces kidnapped three Palestinians, including a minor, during clashes that erupted in al-Aroub Refugee Camp. They were identified as Nasim al-Titi, 13, Anan Kawamleh, 16, and Yousif al-Titi, 20.

In Bethlehem, forces took three Palestinian teenagers from the town of Taqou to the east, after raiding and searching their families’ homes. They were identified as Ali Sabah, 17, Marwan Abdel-Khalil, and Sabir al-Badan, 15.

Meanwhile in Jenin, forces also abducted two Palestinian teenagers during clashes that broke out in the village of Barta’a, where soldiers targeted the Palestinian locals with stun grenades and rubber-coated steel bullets. The detainees were identified as Tareq, and Ja’afar Qabaha, both aged 16.

Meanwhile, forces detained at least four Palestinians during an Israeli army raid and search campaign in the city of Nablus. They were identified as Ammar Breek, Iyad Abi Zahra, and Na’el Bishtawi.

Forces further raided several other homes in the town of Huwwara to the south of Nablus, in search for a wanted Palestinian. Forces raided the home of Ahmad Dmaidi to detain him, however, Ahmad escaped before being captured, while his father was detained as hostage until his son turns himself in, according to Fatah spokesperson in Huwwara, Awad Njm.

Over 90 Palestinians injured in latest clashes

At least 90 Palestinians have been injured in clashes with Israeli soldiers and settlers on Tuesday across the occupied West Bank and East Jerusalem, the Palestinian Red Crescent said.

She said that another 57 suffered excessive tear gas inhalation, and two were violently assaulted.
The figures were being updated as clashes continued throughout the West Bank into Tuesday evening.
Meanwhile, Israeli forces have carried out 13 attacks on Red Crescent ambulance crews since Sunday, Foqaha said.

She said that the latest attacks on their emergency relief teams brought the total number to 27 since Friday, and had left 17 staff members injured and 10 ambulances damaged.

Fierce clashes were reported across the occupied West Bank and East Jerusalem for the fifth straight day on Tuesday.

In East Jerusalem’s Shufat refugee camp, Israeli forces shot a Palestinian in the back with live fire, while two others were hit with rubber-coated steel bullets in the head and legs.

The Wadi Hilweh Information Center said Israeli forces also assaulted Suad Abu Romoz while she was standing in front of her home in Silwan.

Clashes were also reported in the early evening in the Bethlehem-area village of Tuqu, where a Palestinian was shot with a rubber-coated steel bullet and dozens more suffered severe tear gas inhalation.

The man was shot in the leg and taken to hospital for treatment. An Israeli soldier was also hit with a rock and received treatment at the scene.

Earlier, over 51 were injured in the Ramallah district alone, while up to 10 were shot with rubber-coated steel bullets during clashes in Bethlehem following the funeral of a 13-year-old boy shot dead the day before.

In Bethlehem, Israeli forces shot and injured 10 Palestinians with rubber-coated steel bullets as fierce clashes broke out following the funeral of a 13-year-old boy who was shot dead by Israeli forces the day before.

Two Palestinians were hit in the head with rubber-coated steel bullets and were rushed to hospital for treatment, medics told Ma’an News Agency.

The Palestinian Red Cross, on Sunday, declared a state of emergency across the occupied Palestinian territory, and said it was putting all its staff, teams and volunteers on standby.

The 90 reported injuries on Tuesday will bring the total injured since Saturday to nearly 600. Of those, Israeli forces has shot 49 with live rounds.

Tensions had been mounting steadily for weeks across the occupied Palestinian territory due to Israeli restrictions on Palestinians seeking to enter the Al-Aqsa Mosque compound in East Jerusalem.

However, it was violent Israeli reprisals in the wake of two separate attacks that killed four Israelis last week that spurred the recent clashes.

The PLO has warned that attacks by both Israeli soldiers and settlers indicates the ‘Israeli government is deliberately creating a situation of violence and instability that threatens to spiral out of control.’