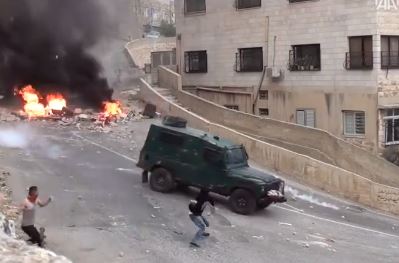 The Palestinian Ministry of Health (MOH) in the occupied West Bank has reported that at least 129 Palestinians have been injured by Israeli army fire and gas bombs in different parts of the West Bank, Tuesday, and that the soldiers deliberately targeted medics and journalists.In a press release, the MOH said fifty wounded Palestinians were transferred to the Palestine Medical Center in Ramallah; two of them suffered serious injuries after being shot with live Israeli rounds, while the rest suffered mild-to-moderate wounds.

It added that eleven Palestinians were shot with rubber-coated steel bullets in Bethlehem.

Seven more Palestinians were shot with rubber-coated steel bullets, while many residents suffered the effects of tear gas inhalation. in the southern West Bank city of Hebron.

Furthermore, 45 Palestinians were injured in Nablus, and 16 in Jenin, both in the northern part of the West Bank, suffered mild-to-moderate injuries.

Media sources in Jenin said two were shot with live rounds, and dozens suffered the effects of teargas inhalation, during clashes near the al-Jalama roadblock, north of Jenin.

The soldiers also invaded a pottery store near the roadblock, and kidnapped the owner after assaulting him.

Head of the Emergency Unity of the Red Crescent in Jenin Mahmoud Sa’adi said the soldiers also fired live rounds, rubber-coated steel bullets and gas bombs on protesters, who peacefully marched against the escalating Israeli violations, wounding two children, identified as Ahmad Abdul-Rahim and Mohammad Omran Sabah, in their legs.

The two were moved to a hospital, while many Palestinians received treatment for the effects of tear gas inhalation.

He also said that the soldiers attacked medics, and deliberately opened fire on a Red Crescent Ambulance, near Ramallah, smashing its windshield.

In the Hebron district, in the southern part of the occupied West Bank, soldiers wounded many Palestinians, especially on the main junction leading to Kharsa village, and the Halhoul Bridge, during clashes that took place in the two areas.

The soldiers also fired gas bombs at many homes, causing families to suffer the effects of tear gas inhalation.

Two young men were shot with rubber-coated steel bullets in Bab az-Zawiya, in the center of Hebron city.

Medical sources said two young men, 19 and 22 years of age, have been moved to the Hebron Governmental Hospital, suffering moderate injuries after being shot with rubber-coated steel bullets.