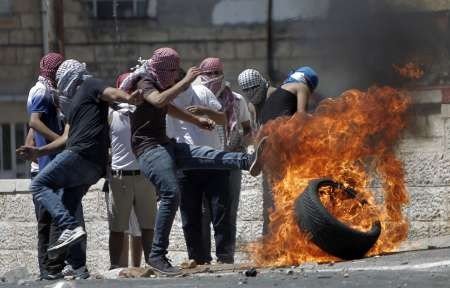 A Palestinian youth was killed on Thursday evening and at least 35 others injured during clashes in Sho’fat refugee camp in Jerusalem. Wesam Faraj, 20, was shot by an exploding bullet fired by Israeli soldiers directly to his heart, Palestinian medical sources reported.

According to the Palestinian Red Crescent Society (RCS), 35 civilians were injured by Israeli live gunfire and rubber-coated steel bullets.

The clashes erupted when Israeli forces invaded the camp and tried to raid the family home of Subhi Abu Khalifa, who stabbed and injured two settlers in Jerusalem earlier on Thursday midday.

The Israeli government recently activated an old law to allow its army to demolish Palestinian attackers’ homes and their families.

Earlier on Thursday The Palestinian Red Crescent Society (RCS) announced that at least 94 Palestinians have been injured during the ongoing clashes all over the West Bank since Thursday morning.

According to the RCS, five of those injured were hit by live gunfire fired by Israeli troops at protesters.