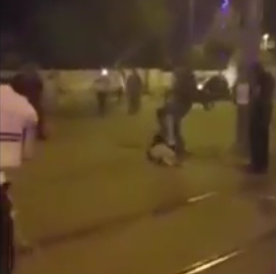 Two videos have emerged, filmed by eyewitnesses of the fatal shooting of 19-year old Fadi Alloun by Israeli police in Jerusalem Sunday morning, that directly contradict the police account. The videos show a mob of Jewish Israelis chasing the boy shouting, ‘Kill him! He’s an Arab’, and as Alloun runs toward a police station for help, he is shot by the police with multiple rounds of live fire.The footage clearly shows that Alloun was unarmed as he was being chased, terrified, down the street by the mob. As he runs toward the police, the mob shouts toward the police in Hebrew “Shoot him! He’s a terrorist! Shoot him!” and “Don’t wait! Shoot him!”

The police immediately shoot the young man with at least ten bullets throughout his body, killing him. As his limp body falls to the ground, the crowd cheers and begins to kick and stomp on him. Only after shooting him does a police officer ask the crowd, ‘Did he [referring to the now deceased Fadi] stab anyone?’ Someone in the crowd of Jewish Israelis then clearly replies, ‘No.’

Following the fatal shooting, the Israeli police released a statement claiming that Fadi had allegedly stabbed an Israeli, but they have presented no evidence to back this allegation.

The Israeli police and military frequently claim that Palestinians they have killed were carrying weapons or involved in attacks, and in most cases, according to Palestinian and international monitoring organizations, those allegations later turn out to be false.

Following the fatal stabbing of an Israeli settler couple by a Palestinian teen last Thursday, I sraeli police and military forces have killed four Palestinians, claiming in each instance that the Palestinian in question was engaged in an attack or holding a weapon. Since the past claims by Israeli authorities in such cases have often turned out to be false, Palestinian rights groups have called for a thorough, independent investigation into each incident.

In at least one of the cases this week, eyewitnesses directly contradicted the version of the story reported in most media. An 18-year old girl was shot by an Israeli settler who jeered at her and tried to remove her headcovering, and when she tried to push him away, he shot her. He then tried to claim that the girl stabbed him, but the allegation turned out to be false, according to multiple eyewitnesses who watched the attack take place.

In addition, the Israeli authorities have refused to release the teen’s body to his family, and the family has been unable to conduct a funeral as of Friday. This refusal to release the body of the slain 19-year old has led the Addameer Prisoner Support and Human Rights Association to submit a legal request to the Israeli government that they release Alloun’s body to his family.

Muslim tradition requires that a person be buried within a day of their death, and the delay has led Fadi’s aunt to say the teen ‘has been killed twice’.

Fadi was raised by his father in Jerusalem, having been severed from his mother and younger brother at the young age of two, when his mother took his baby brother with her to Jordan to take care of her ailing father, and Israeli authorities refused to allow her to return to her husband and young son in Jerusalem. The Electronic Intifada documented this tearing apart of Fadi’s family, as well as many other disturbing impacts of the Israeli occupation on the young man’s short life.

His father Samir Alloun told reporters from the Electronic Intifada, “Fadi was loved by everyone and this support means a lot to me. But I have lived my entire life for him. I do not know how I will go on without him.”

Palestinian Shot to Death by Israeli Police In Jerusalem