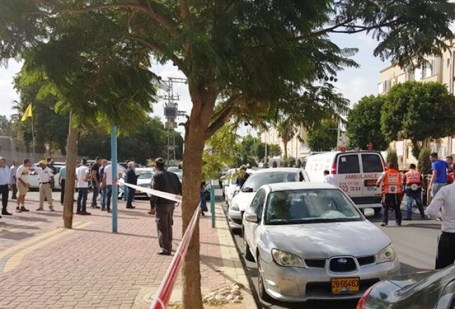 Israeli sources reported on Friday that an Israeli teen stabbed four Palestinians in Dimona, the southern part of the country, while an Israeli mob tried to murder a Palestinian in Netanya, on Thursday.Israeli Ynet News claimed that the stabber, who attacked and wounding the four Bedouins, “suffers a mental illness,” and that he admitted his attack carried “a nationalistic motivation.” It added that the wounded Palestinians are municipal workers.

The attacker was apprehended, and was taken to a police center for interrogation. The incident took place at the entrance of a school in Dimona.

The Ynet said two of the wounded were moved to the Soroka Medical Center in Beersheba (Be’er as-Sabe’) due to the seriousness of their wounds, and two others suffered mild injuries.

On Thursday at night, a Jewish mob tried to kill three Arabs in Netanya, while shouting “Death to Arabs,” Israeli Ynet News said. Two of attacked managed to escape unharmed, while one was injured; the police managed to reach him in time, but no Israelis were arrested.

The Ynet said that, according to statements from bystanders, “dozens of Israelis saw three Arabs, and one of them shouted Allahu Akbar (God is Greater) before an entire crowd of Israeli gathered around them.

Two managed to escape, while the third was beaten with stick and chairs before be collapsed, but the attackers kept beating him while shouting “death to Arabs,” and “Netanyahu mows down Arabs.”
The mob even was about to assault a woman while attacking and beating the Palestinian man and only stopped after she started shouting “I am Jewish,” the Ynet said.

The police managed to disperse the crowd, while Israeli medics arrived on the scene, and moved the wounded Palestinian to a local hospital. Although his condition was described as mild, he suffered cuts and bruises to various parts of his body.

In addition, a Palestinian woman, in her thirties, suffered a mild injury after being attacked, while driving her car in Netanya.

Four Palestinian workers were injured on Friday morning when an Israeli settler attacked with a knife in Dimona, in the Negev desert in southern Israel.

Two of the injured were identified as Ahmad Al Azah and Sa’di Rasrass, from Al Fowar refugee camp in the southern West Bank city of Hebron.

According to Israeli police reports, the stabbing attack by the Israeli settler was politically motivated, and that police officers have managed to arrest the assailant.

Elsewhere, a group of Israeli settlers uprooted on Friday morning olive trees owned by farmers from the village of Rojeeb, to the south of the northern west Bank city of Nablus.

According to Palestinian famers, settlers have stepped up their attacks targeting olive trees as the season of olive harvest began this week.