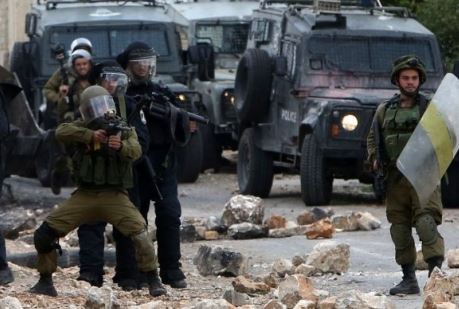 Palestinian medical sources have reported, Friday, that Israeli soldiers shot and injured eighteen Palestinians during clashes close to the Huwwara roadblock, and Beit Forik town, in the northern part of the occupied West Bank. The soldiers also kidnapped a child in Hebron.The sources said that the soldiers deliberately resorted to the use of live ammunition against the Palestinian protesters wounding fourteen, while four others were shot with rubber-coated steel bullets.

Head of the Emergency Unit of the Red Crescent in Nablus, Abdul-Halim Ja’afra, said dozens of residents suffered the effects of tear gas inhalation.

He added that the soldiers also fired live rounds at one of the Red Crescent ambulances, shattering its rear window, and that one medic was shot by a gas bomb in his arm.

On Friday evening, soldiers kidnapped a Palestinian child, after repeatedly kicking him, in Jabal Johar area, in the southern West Bank city of Hebron.

The soldiers also fired dozens of gas bombs and concussion grenades, targeting protesters and several Palestinian homes in the area, causing many residents to suffer the effects of tear gas inhalation.

It related news, the Palestinian Health Ministry announced that six Palestinian civilians were killed on Friday and at least 83 others were injured by Israeli troops gunfire during ongoing clashes between Palestinian Youth and Israeli troops in different areas of the Gaza Strip and the West Bank.