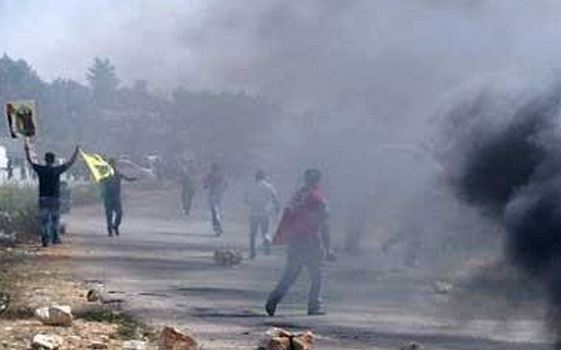 Palestinian medical sources have reported, on Friday evening, that dozens of residents suffered the effects of tear gas inhalation, during clashes that took place after Israeli soldiers invaded Zabbouba village, West of the northern West Bank city of Jenin.Head of the Jenin Office of the Red Crescent Society Mahmoud Sa’adi said dozens of residents, including entire families, suffered the effects of tear gas inhalation, especially since the army deliberately targeted homes in areas of clashes.

He added that two families, one of nine members and another of eight, suffered the effects of teargas inhalation.

An Israeli gas bomb entered the home of one of the Palestinian families, after shattering a window, causing the entire family, including children, to suffer the effects of tear gas inhalation.

In the northern West Bank city of Nablus, Israeli soldiers shot and injured eighteen Palestinians during clashes close to the Huwwara roadblock, and Beit Forik town, and kidnapped a child in Hebron.

It related news, the Palestinian Health Ministry announced that six Palestinian civilians were killed on Friday and at least 83 others were injured by Israeli troops gunfire during ongoing clashes between Palestinian Youth and Israeli troops in different areas of the Gaza Strip and the West Bank.