ٍSix killed, Including a Child; 25 Others Injured as Israeli Troops attacks Gaza Protests 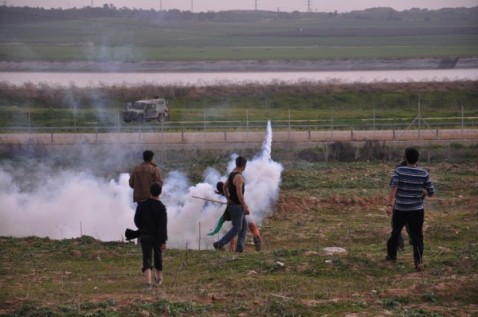 Six Palestinian civilians, including a 15-year-old boy, were reported killed on Friday midday by Israeli troops live gunfire in two separate protests organized in Gaza City and Khan Younis, south. Three youth were killed and at least 20, injured in clashes erupted in the area sounding the Nahal Oz military base located to the east of Gaza city.

Israeli troops opened live gunfire at Palestinians protesting the Israeli violations and attacks on Palestinians in Jerusalem and the West Bank.

Palestinian medical sources said that Ahmad Al Hirbawi, 19, was killed due to live gunshot wound in his chest, in addition to Abdul-Majid Al Wahidi, 20, and Shadi Husam Doulah, 20, both from Gaza City, were killed in the clashes near Nahal Oz.

Five more civilians were injured by Israeli troops gunfire during the ongoing clashes there.

The fifth killed Palestinian was reported to be shot during clashes between local youth and Israeli troops in Khan Younis. He was later identified as Adnan Mousa Abu Oleyyan, 22.