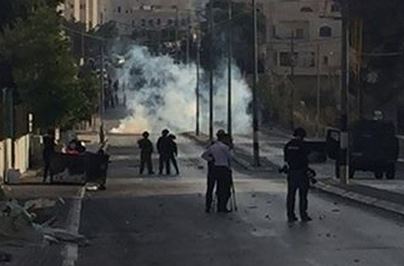 Medical sources have reported, on Saturday at night, that a young Palestinian man was shot and injured with live Israeli army fire in Za’tara town, east of the West Bank city of Bethlehem, before the soldiers abducted him.The sources said that Bilal Sami Abu Salem, 21, was shot with several live rounds after Israeli soldiers invaded the town, and that they kidnapped him, and took him to an unknown destination.

The army surrounded the entire town, and clashed with dozens of local youths, who hurled stones and empty bottles on their vehicles.

In related news, dozens of residents suffered the effects or tear gas inhalation near the main entrance of Rommana village, west of the northern West Bank city of Jenin.

The soldiers invaded the village, searched Palestinian olive orchards while firing flares, and clashed with local youths who hurled stones and empty bottles on them.