Health Ministry: “Seven Palestinians Killed on Saturday, 14 in 2 Days, 21 in Past 10 Days” 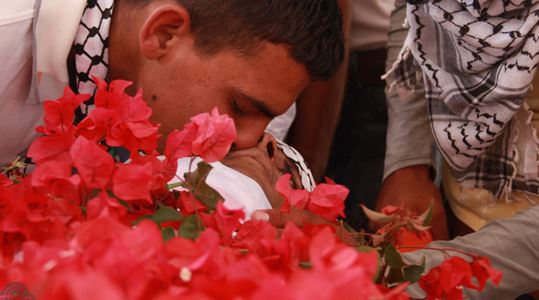 The Palestinian Ministry of Health (MOH) has reported that Israeli soldiers shot and killed seven Palestinians, including two children, on Saturday, and that the number of Palestinians shot dead by Israeli gunfire in the past two days is 14, while more than 240 have been injured. In a press release issued on Saturday evening, the MOH said that seven Palestinians were killed during the day on Saturday in occupied Jerusalem, Shu’fat refugee camp, Hebron and the Gaza Strip, and that two of those killed were children.

The Ministry added that the number of Palestinians killed by Israeli army fire since October 1st (ten days) currently stands at 21, including 12 in the West Bank. In the same time period, more than 1100 Palestinians have been injured with live rounds and rubber-coated steel bullets, while hundreds suffered the effects of tear gas inhalation.

In addition, the Palestinian Minister of Health Jawad Awwad strongly denounced the Israeli military invasion of the al-Makassed Islamic Hospital and the Augusta Victoria Hospital in occupied Jerusalem.

He said that invasions of hospitals are serious violations of International Law, the Fourth Geneva Convention and every related international human rights treaty.

Awwad called on various international human rights and legal organization to actively intervene, and stop the escalating Israeli crimes against the Palestinians in the occupied state of Palestine.

Names of slain Palestinians since October 1:

Soldiers Injure A Palestinian Near Bethlehem, And Kidnap Him