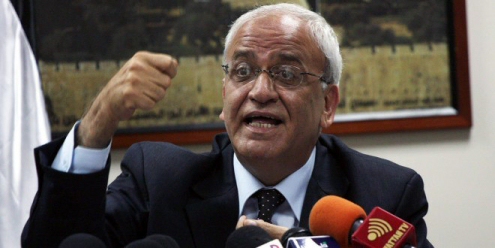 Over the past few days, many have wondered whether this is the beginning of a third Intifada. For the Palestinian people, this question is no longer relevant. There has not been a single day, in almost half a century, that we haven’t suffered from the Israeli occupation; the main source of violence in our region. Occupation means control, which is precisely what Israel has been doing with our lives, with a daily oppression and humiliation in our own homeland by a belligerent occupying power.During his U.N. speech President Abbas said: “I must reiterate: the current situation is unsustainable. Our people need genuine hope and need to see credible efforts for ending this conflict, ending their misery and achieving their rights.” He called upon the Israeli society: “I hope that you will consider the dangerous reality on the ground and look to the future and accept for the Palestinian people what you accept for yourselves.”

Yet, Netanyahu’s right-wing extremist government continues to deny Palestinian rights and to incite violence, clearly indicating that ending this Apartheid regime is not an option. His top diplomat, [Israeli Deputy Foreign Minister Tzipi] Hotovely, just yesterday declared that this government was formed with the goal of preventing a two-state solution. Netanyahu assumes that no matter what he says or does, the international community has nothing else to offer than to call for the “resumption of negotiations.”

To consider what is happening just as a “new wave of violence” mainly overlooks the point that Palestinians have been under a belligerent occupation for decades, that Israel continues with its Apartheid policies and to build illegal settlements on occupied Palestinian land, and that Israel has been aiming to change Palestine’s identity; particularly occupied East Jerusalem. Israeli attacks on the Al-Aqsa Mosque compound, incited by members of Netanyahu’s government, are just one example of the daily Israeli incitement not only against Palestinian rights as a whole, but against the very existence of an independent State of Palestine as a sovereign nation.

Palestine has been requesting international protection from the United Nations for over a year, but so far it has failed to take action. Palestinians all over occupied Palestine suffer as a result of the lack of accountability and the impunity granted to Israel by the international community. Now, as Mr. Netanyahu decides to declare war against Palestinian civilians by adopting a set of collective punishment policies, and the Mayor of the Israeli Jerusalem Municipality Mr. [Nir] Barkat calls upon Israeli-Jews, not necessarily soldiers, to carry their weapons around the city, we can only expect that more violence and oppression will arrive in the coming days.

Such a culture of impunity has incentivized crimes and has made Israel realize that they will not pay any price for continuing to deny the internationally recognized rights of the Palestinian people.

What has been happening for the last decades in occupied Palestine is about cementing sovereignty over land that the international community agrees does not belong to Israel, and over a subject people, the Palestinians, all in contravention of international law.

Israel must be held accountable for its crimes. This culture of impunity has to end now before it creates irreversible damage. Israel’s recent actions—including attempts to discredit victims’ families and eyewitnesses, deliberately targeting civilians and pursuing a policy of collective punishment—epitomize the repression and systematic violations of human rights inherent in Israel’s unjust occupation. Israel’s occupation sanctions, oppresses and forbids justice at every turn.

The international response to the events of the past few days has been far from what the situation on the ground requires. I have read some statements calling for a “resumption of negotiations.” Let me be clear: negotiations are not a substitute for justice. The parties making such statements are fully aware that the Israeli government is not committed with the basic outcome required from any negotiations, which is to end the Israeli occupation that began in 1967.

The question is not whether this is a third Intifada or an isolated wave of violence. What we have seen are symptoms of this reality of occupation, colonization and Apartheid that Israel has imposed over Palestine against the basic principles upon which the international community was created. The world has allowed this to happen.

The international community has to assume its responsibilities by holding Israel accountable for the crimes it continues to commit against the land and people of Palestine. Without international intervention things are not going to change. Providing international protection to the Palestinian people and to stop treating Israel as a state above the law is the least that we could ask for.

Dr. Saeb Erekat is the Secretary General of the Palestine Liberation Organization.