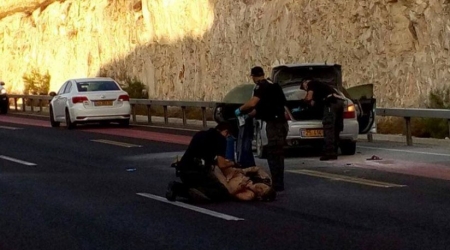 An Israeli officer was lightly injured in a car explosion Sunday morning, at a checkpoint near Ma’ale Adumim settlement, occupied East Jerusalem. The driver was severely injured, Israeli sources claimed.Ynet reported, according to Al Ray, that a Palestinian woman activated an explosive device at a checkpoint in the West Bank; an Israeli officer was lightly wounded when he tried to stop her. He was evacuated to Shaare Zedek Medical Center with burns to his face reported.

Israeli police and army, accompanied by explosives experts, rushed to the site to check that there was no explosive device at the site.

He signaled for her to stop by the side of the road, and, when he stepped outside to inspect her, she exclaimed ‘Allahu Akbar’ (God is Greatest!) and detonated the device.