Four, Including Students, Kidnapped in Hebron 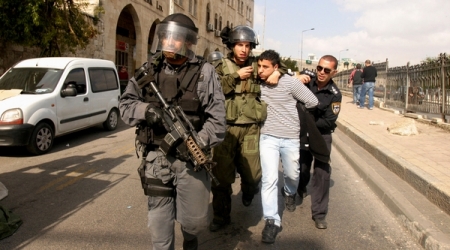 Israeli forces, Sunday, abducted four Palestinians from the West Bank district of Hebron, according to local sources.WAFA correspondence said that Israeli forces deployed in the vicinity of al-Ibrahimi mosque detained two female school students on their way home from school.

The students, who were identified as Sumaya Abu Turkey, and Hala Abu Dauod, both aged 14, were led by army soldiers to an Israeli military center there.

Meanwhile, forces kidnapped two Palestinians from the town of Beit Ummar to the north, following clashes that erupted with Israeli forces in the town.

Coordinator of the popular committee against the wall and settlements, Mohammed Awad, identified one of the detainees as Odeh al-Alami, 20, while the other detainee’s identity remains unknown until the moment.

Earlier Sunday, Israeli police detained five Palestinian workers while they were present at their workplaces inside the 1948 land, citing unpermitted entry to Israel as a pretext. The five were identified as Rami Abu-Arra, 18, Ali Abu-Arra, 22, Ehab Sawafta, 22, and Hassan Abu-Arra, 24, and Hosni Saeed Khalilia.

Also in Hebron regional news: (VIDEO) The Other Occupation: Settlers Terrorize Palestinians of the West Bank