Israeli Army Kidnaps 30 Palestinians In The West Bank And Jerusalem 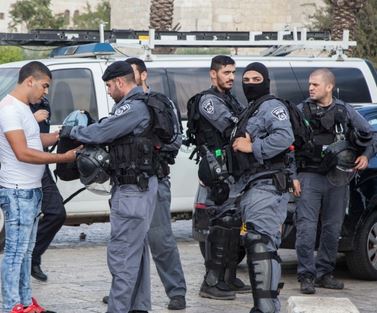 Eyewitnesses said dozens of military jeeps invaded the town, after surrounding it, and that the soldiers smashed the doors of the invaded homes, before breaking into them.

The soldiers also invaded many homes in Silwan town, and several neighborhoods in occupied Jerusalem, and kidnapped eleven Palestinians.

The soldiers also invaded Jabal al-Mokabber neighborhood, southeast of Jerusalem and kidnapped Ahmad Jaber, 17, while on Sunday at night, they kidnapped Mohammad al-Maghrebi, 14, in Jabal az-Zeitoun, and Bakr ‘Oweis, 17, in Ras al-‘Amoud in Silwan.

In addition, soldiers invaded various neighborhoods in Hebron city, and the towns of Surif, Doura and ath-Thaheriyya, and installed several roadblocks, especially on roads leading to Sa’ir and Halhoul towns, in addition to Hebron’s northern road, before searching dozens of cars and inspecting the ID cards of the passengers.

On Sunday at night, the soldiers invaded Beit Ummar town, north of Hebron, and kidnapped a Palestinian identified as Musleh Ali Awad, 33.

In related news, clashes took place on Monday morning near the ‘Atara Israeli military roadblock, north of the central West Bank city of Ramallah, causing many residents, including schoolchildren, to suffer the effects of tear gas inhalation.

Clashes also took place in Birzeit, near Ramallah, after the soldiers assaulted dozens of protesters.