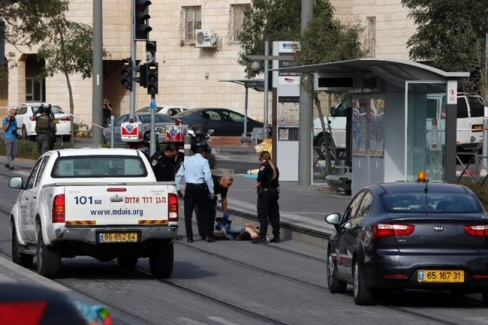 Two Israelis were seriously injured in a third reported stabbing attack in Jerusalem, on Monday, with one Palestinian suspect, reportedly a child, shot dead at the scene and another wounded, Israeli police said.The stabbing attack took place near the illegal Pisgat Zeev settlement in East Jerusalem, with Israeli police reporting that two Israelis were seriously injured and a Palestinian suspect shot and killed.

A second suspect was shot and injured, police added.

Relatives told Ma’an News Agency that the two Palestinian boys were from Beit Hanina and aged between 12-14, without providing further details about which boy was reported killed.

Israeli media reported that one of the Israeli victims, a 13-year-old teenager, was critically wounded in the attack, while another 25-year-old sustained serious injuries.

The incident was the third alleged stabbing attack on Monday.

Just hours before, a Palestinian teenager, reportedly a schoolgirl, was shot and seriously injured after she allegedly carried out an attack that injured two Israelis in East Jerusalem near the Israeli police headquarters.