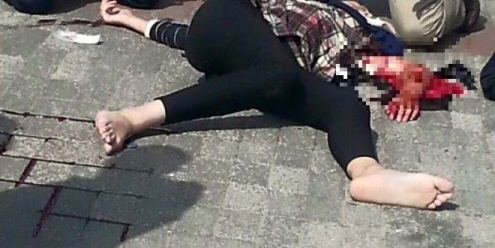 Israeli police, on Monday afternoon, have shot and critically injured a Palestinian schoolgirl who they claimed “tried to stab an officer”.The shooting took place on the Ammunition Hill in Sheikh Jarrah town, occupied East Jerusalem.

According to PNN, initial reports say that the girl is 15 years old, and was going home from school with her friends.

She was shot while still wearing her school uniform.

A Palestinian guy at the scene was also stopped and arrested after he tried to intervene.

One Israeli policeman was lightly wounded.

This morning, Mustafa Al-Khatib (18) was executed by Israeli police, who claimed he attempted to stab an officer.

Eyewitnesses said that Mustafa had no weapons, and that the police shot him for no reason.