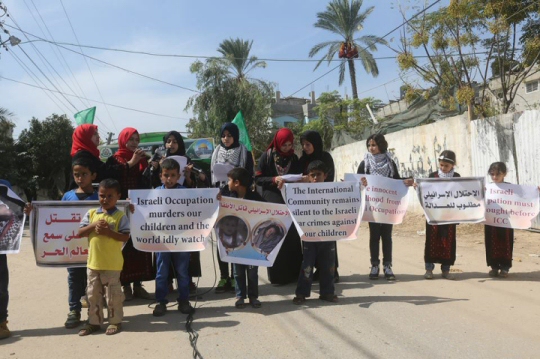 A group of Gaza children organized a stand on Tuesday, in front of the mourning tent erected for the murdered child, Rahaf Hassan, age 2, who was killed along with her pregnant mother two days ago, after an Israeli airstrike directly bombed their home at Al-Zaitoon neighborhood in Gaza.The children delivered a speech in three languages: Arabic, English and French, calling on the international community to take a serious action against the Israeli crimes, especially targeting children in their homes.

The children have also called on the international community to instantly intervene to stop the Israeli aggression against Palestinian people in the West Bank, Gaza and pre-1948 occupied territories, assuring on their rights of live, play and education.

In this stand, which was organized by the Ministry of information in Gaza, according to Al Ray, the children called to open an urgent international investigation regarding the murder of Rahaf and her mother, and to bring the Israeli occupation to justice for the crimes committed against this family and others.

In the same context, the children pointed out the necessity of documenting crimes committed by the Israeli occupation in order to expose them to the world, especially the brutal acts against Palestinian children.

The children noted that the murder of Rahaf Hassan was not the first or last crime; and it should put an end to the continued Israeli onslaughts against the children in Palestine, appealing the human rights organizations to bring cases in front of the International Criminal Court to judge the Israeli occupation.