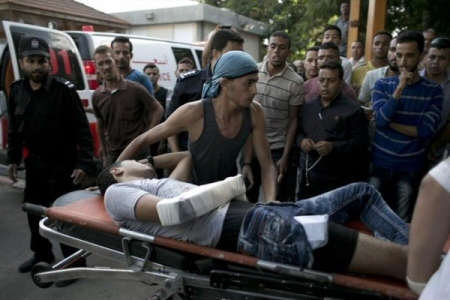 At least 50 Palestinians were injured by Israeli forces during rallies in the northern and central Gaza Strip on Tuesday, with at least three seriously wounded, medics said.Dozens of Palestinian youths took part in a demonstration in Beit Hanoun in northern Gaza to rally against ongoing Israeli violations in occupied East Jerusalem and the West Bank.

Witnesses said, according to Ma’an, that Israeli forces opened fire at the demonstration from military towers, injuring five, including one critically.

Another demonstrator was also reportedly detained.

At least 42 Palestinians were injured by tear gas and rubber coated bullets, including journalists covering the protests.

In central Gaza, eight Palestinians were injured by live fire, rubber-coated bullets, and tear gas during a demonstration east of the al-Bureij refugee camp.

Later in the day, hundreds of Palestinians attempted to breach the ‘security fence’ and Israeli forces fired gun shots in the air, a spokesperson added.

On Sunday, a pregnant woman and her two-year-old daughter were killed when an Israeli air strike caused their home to collapse in southern Gaza City.

The Israeli army said in a statement that the air strikes targeted ‘two Hamas weapon manufacturing facilities in the northern Gaza Strip’ and made no mention of any deaths or damage to civilian homes.

The strikes were reportedly carried out in retaliation for a rocket fired from the blockaded coastal enclave late on Saturday night.