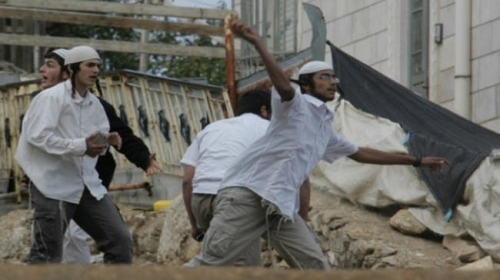 Israeli settlers, Tuesday afternoon, attacked olive farmers near Turmus‘ayya and Tal villages, south and west of Nablus, as well as hurled stones at a Palestinian car driving at Ramallah-Nablus Road, said a local activist and security sources.According to WAFA, several settlers attacked four Palestinian farmers while they were picking olives near the Nablus village of Tal.

The settlers, protected by Israeli forces, detained and attacked four Palestinian farmers who were harvesting their olive trees near the village. The farmers were identified as Mohammad Ishtayeh, Ahmad Hindi, Meqdad Zeidan and Karim Ramadan.

This came as a Palestinian teenage from the Nablus village of Beita was reportedly attacked by settlers near Karne Shomron settlement, east of Qalqilia city.

Mahmoud Yassin, 18, suffered from bruises and was admitted into a Nablus hospital in the aftermath of the attack.

In the meantime, Ghasan Daghlas, an anti-settlement activist in the northern West Bank, told WAFA that settlers threw stones at a Palestinian man driving along Ramallah-Nablus Road, near Turmus‘ayya village, south of Nablus, smashing his windshield and injuring him, before they fled the scene.

The man, identified as Mohammad Qutob, 58, sustained light injuries and was rushed into a Nablus hospital for treatment.

Dozens of settlers, Tuesday, attacked other Palestinian vehicles with stones at Nablus-Qalqilia road, as well as near the town of Yatta in Hebron district, according to local sources.

The sources said settlers from the illegal settlement of Karnei Shomron, illegally built on the land of Kafr Laqif village, attacked Palestinians vehicles with stones while passing at the Nablus-Qalqilia main road. The settlers also chanted racist slogans against the Palestinian passers-by.

Meanwhile, settlers guarded by a military escort assaulted Palestinian vehicles with stones and empty glass bottles near the town of Yatta, south of Hebron, provoking confrontations with local Palestinians.

Settlers recently stepped up their violent attacks against Palestinians across the West Bank and Jerusalem, amid growing tension and renewing clashes between Palestinians and the Israeli army and police.

Monday evening, at least 18 Palestinians were shot and injured with live rounds fired by Israeli forces during clashes at Huwwara military checkpoint.

Palestinian medical sources affirmed that all injuries were admitted into hospitals for treatment.