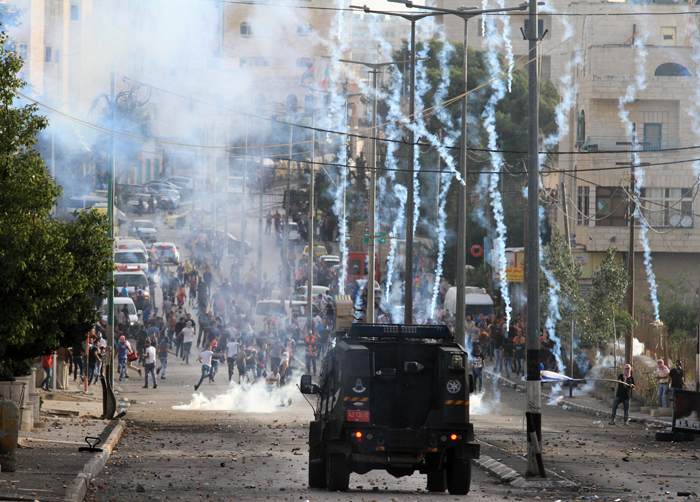 Since October 1st, 30 Palestinians have been killed, and more than 1500 others injured by Israeli troops, according to the most recent report by the Palestinian Ministry of HealthThe MOH said in its report that among the 30 killed Palestinians there are seven children. According to the press statement, 19 Palestinians were killed in the West Bank including Jerusalem, and 11 from the Gaza Strip since October.

The Ministry of Health report also showed that since the start of October 4000 residents were treated for the effects of tear gas inhalation fired by Israeli troops targeting Palestinian protesters.

Israeli forces shot and killed a Palestinian from the Duheisha refugee camp Tuesday evening during clashes at the northern entrance of Bethlehem, medics said. Mutaz Ibrahim Zawahreh, 27, was hit with a live bullet in the chest and was taken to hospital in a critical condition, Medical sources at the Bethlehem Governmental Hospital told local media. Zawahreh was rushed to the operation room but quickly succumbed to his wounds, they added.

In a separate attack on Tuesday morning, a 22-year old Palestinian man allegedly stabbed a 32-year old Israeli just before 9 am near the bus station in the Israeli city of Ra’anana. The Palestinian was then shot by several Israeli bystanders and critically injured.

A third alleged attack by a Palestinian against Israelis remains uncertain – the incident may just have been a traffic accident, despite Israeli claims that the Palestinian driver deliberately drove his car into an Israeli one.

Clashes on Tuesday were reported in different parts of the West Bank and Gaza. In the coastal region, 50 civilians were injured when Israeli troops attacked protesters at border areas in northern and central Gaza Strip.

The Palestinian Ministry of Health stated on Tuesday that 33 Palestinians have been injured during ongoing clashes between local youth and invading Israeli soldiers in West Bank communities. Among the injured there were 14 children, the MOH reported.

The names of those killed by the army in October According to The Palestinian Ministry of Health:

18. Mutaz Ibrahim Zawahreh, 27, Bethlehem.
19. Unknown man from Jerusalem in his thirties. (no name was available until the time of his report )