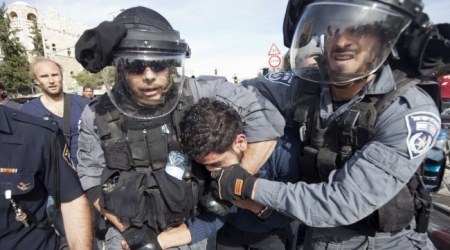 Police also took a minor in Jerusalem’s Old City. He was identified as Omar Muna.

Meanwhile in Hebron district, Israeli forces stormed the city and the nearby towns of Bani Na’im and Dora, and abducted four Palestinians identified as Asem Abu-Esheh, 19, Jihad Abu-Skout, 20, Yasser Masharqa, 20, and Hussein Shahatit.

The army also stormed the nearby al-Arroub refugee camp and detained five Palestinians after raiding their homes and sabotaging their furniture.

Several hours later, forces kidnapped another Palestinian in the Hebron town of Surif, after brutally assaulting him during a new round of clashes. The detainee was identified as Omar al-Hih.

Another Palestinian was reportedly taken and several others were physically assaulted by Israeli forces in the vicinity of al-‘Arrub College in the city. ‘Abdullah Mhaisin, 20, a college student, was detained while making his way out of the college. Israeli forces abducted another Palestinian from the city. He was identified as Taleb Abu Sneina, 23.

Meanwhile in Tulkarem city, Israeli soldiers abducted two Palestinians after raiding their homes and sabotaging furniture. The two were identified as Zeyad Abu-Zanat, 23, and Muhannad Hamshari, 24.

The detainees, identified as Farid ‘Alawneh and ‘Awad Khaliliya, are from the Jenin town of Jaba‘.

Meanwhile in Nablus district, they army stormed the towns of Beit Furik and Asira esh-Shamaliya and summoned four Palestinians to appear for interrogation.