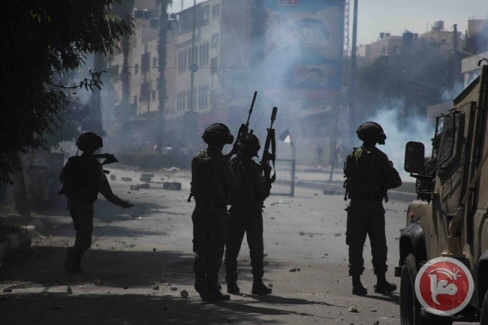 Israeli forces shot a 17-year-old Palestinian in the chest as clashes erupted throughout the Hebron area on Wednesday, medics said.Medical sources identified the teen as Bare’ Ismael Shalash, who was shot and injured in the town of Beit Awwa west of Hebron.

The Palestinian ministry of health told Ma’an News Agency that his condition was stable after undergoing an operation in al-Ahli Hospital.

The bullet went through his chest to his spine, the ministry added.

A Palestinian boy, Wednesday afternoon, was shot and injured with a rubber-coated steel bullet and dozens others suffocated during clashes that erupted with Israeli forces in Surif town, northeast of Hebron, said medical sources.

The Palestinian Red Crescent medics told WAFA a 13-year-old Palestinian boy was shot near his eye with a rubber-coated steel bullet. He was admitted into a Hebron hospital for treatment.

Forces also broke into several houses in the town, occupying and turning their rooftops into military watchtowers, and deployed across nearby farmlands.

The spokesperson said that the forces ‘identified a perpetrator in the crowd throwing a Molotov cocktail and opened fire, confirming one hit.’

On Tuesday, over 400 Palestinians were injured during clashes in the occupied West Bank and Gaza Strip, at least 31 of whom were shot with live fire, according to the Red Crescent.

Mutaz Ibrahim Zawahreh, 27, was hit with a live bullet in the chest and killed in Bethlehem. He was the 17th Palestinian to be killed during clashes since Oct. 1.