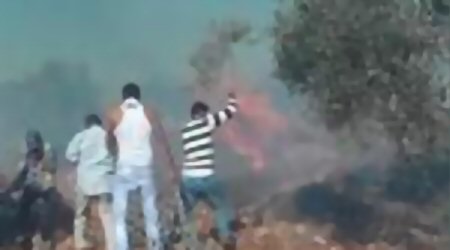 Israeli settlers, Wednesday, set fire to large swaths of Palestinian-owned agricultural land near the village of Burin, to the south of Nablus in the West Bank, and injured a British activist while hurling stones at them, according to local sources.Ghassan Daghlas, who monitors settlement activities in northern West Bank, told WAFA that a number of Israeli settlers broke into the area in the early morning hours and set fire to agricultural fields mostly planted with olive trees.

A British activist, identified as David Hams, was accompanying Palestinian farmers to provide protection and support when Israeli settlers hurled stones at them.

Hams was hit with a large rock, and sustained serious injuries in his head. According to witnesses, Hams’ injury was serious; his blood covered his face and stained his t-shirt. He was transferred to a nearby hospital for medical treatment.

The village of Burin is just two kilometers away from Yitzhar, an illegal Israeli settlement that is infamous for housing the most extremist settler community in the West Bank.

The settlement is at the forefront of the settlers’ movement’s so called ‘price tag’ policy, which calls for attacks against Palestinians in retaliation for actions of the Israeli government against West Bank settlements.

In May 2014, the Israeli security agency Shin Bet said the price-tag hate crimes were mainly attributed to about 100 extremist youths, mostly from Yitzhar, acting on ideas associated with Rabbi Yitzchak Ginsburg at the community’s Od Yosef Chai yeshiva.

Violence by extremist Jewish settlers has been on the in the recent few years. However, it the attacks took a new turn on July 31, when a group of Jewish fanatics killed 18-month-old Ali Dawabsha and seriously injured his entire family, during a predawn arson attack which targeted two homes in the village of Douma, south of Nablus.

The baby’s father, Sa’ad Dawabsha, died of his wounds at an Israeli hospital about a week later, while his mother, Riham, 27, died of critical burns that covered 90% of her body over a month after.

Al-Haq human rights organization said, “Attacks by Israeli settlers in the occupied West Bank against members of the Palestinian population and their property are an extensive, long-term, and worsening phenomenon.”

Since the beginning of October 1, settlers have been attacking Palestinians on the main roads, stoning their vehicles and attacking passersby once they realize they are Palestinians.

The settlers who live in the northern West Bank have also been carrying out early morning and late night’s attacks against vulnerable communities in remote villages.