Calls for BDS by ANC and Scottish Green Party 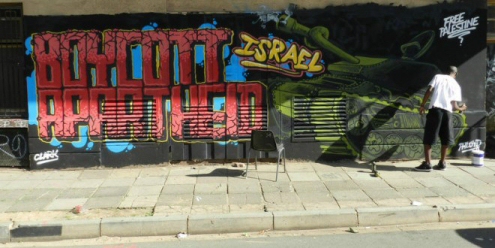 The African National Congress (ANC), South Africa’s ruling party, has reiterated its support for Boycott, Divestment and Sanctions (BDS) measures against Israel at the conclusion of its National General Council held earlier this month.Around the same time, the Scottish Green Party, one of the fastest growing parties in Scotland, endorsed BDS, calling for academic, cultural and economic boycotts against “the racist apartheid” Israel.The ANC’s assembly adopted various BDS-related positions, including discouraging travel to Israel and encouraging “disengagement on programmes and activities that may impact on our solidarity with the people of Palestine.”

According to PNN, the ANC also called for “the isolation of the UN List of businesses that [illegally] operate in the [Israeli] occupied territories in Palestine.” This list includes Dexia, Ahava, Volvo, Riwal, Elbit Systems, HP, Mehadrin, Motorola, Assa Abloy and Cemex. The ANC had previously listed G4S, Caterpillar and Cape Gate as companies that the South African Government ought to exclude from contracts and tenders due to their complicity in Israel’s occupation and violations of international law.

Accusing “apartheid” Israel of “systematic infringements of international law” and perpetuating “the racist ideology of modern day Zionism,” the Scottish Green Party voted overwhelmingly for boycotting “Israeli goods and services and an academic and cultural boycott,” until Israel “fulfils its obligations under international law.”

Among other far-reaching measures, the Scottish Greens called for a military embargo on Israel, UN sanctions, and prosecuting Israeli suspected war criminals. The party also committed itself to pressing for “EU legislation to prohibit the import into the EU of products from Israeli settlements in the West Bank.”

Dr. Haidar Eid, a professor of literature at Al-Aqsa University in Gaza and a spokesperson for the Palestinian BDS National Committee (BNC) that leads the global BDS movement, warmly welcomed the news. He said, “At a time when we are facing extreme brutality, racist criminality and colonial hubris by Israel and its Jewish fundamentalist settler militias, especially in occupied Jerusalem, Palestinians everywhere welcome the ANC’s and the Scottish Green Party’s endorsements of effective BDS measures as a reminder that people of conscience can hold Israel to account and challenge its impunity.”

“As in the struggle against apartheid South Africa, Palestinians are empowered and inspired by international grassroots and civil society measures to isolate Israel and the corporations that enable its regime of occupation, settler-colonialism and apartheid to continue.”

“A new generation of Palestinians is rebelling against Israel’s crusade of dispossession, ethnic cleansing, construction of colonies, and racist desecration of Christian and Muslim holy sites, especially in the occupied Old City of Jerusalem. Palestinian youth are announcing to the world that they will never accept slavery as fate, that they will lead popular resistance to live in justice and dignity.”