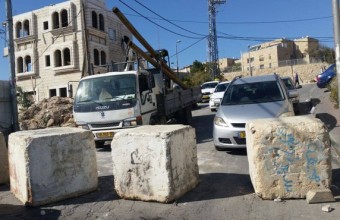 Israeli soldiers stationed at the military watchtower at the entrance of the village, al-Tamimi added, opened fire on Palestinian vehicles that approached the closed entrance, forcing them to take a bypass road via the nearby village of Aboud.

The village has been a scene of clashes between Israeli forces and Palestinian locals as the latter continue to stage anti-wall and settlement rallies every Friday.

Two days earlier, Israeli soldiers raided the village and opened fire on locals.They detained one man who was identified as Mustafa al-Tamimi. During the raid, forces broke and wrecked havoc into a house belonging to Mahmoud al-Tamimi.

A general strike was declared for Thursday, in the Bethlehem district, to protest against Israeli rising extrajudicial killings and mourn 27-year-old young man killed by Israeli forces during clashes.

Shops, schools, universities and institutions across Beit Jala, Beit Sahour and Bethlehem cities and Bethlehem towns and villages closed down to mourn Mu‘taz Zawahreh who was shot dead on Tuesday evening during clashes at the northern entrance of the city.

Zawahreh, a Palestinian from the Bethlehem refugee camp of Ad-Duheisha, was injured as he was hit with a live bullet in the chest. He was admitted into Beit Jala hospital in a critical condition. Zawahreh was rushed to the operation room, but quickly succumbed to his wounds.

The funeral procession left from Ad-Duheisha refugee camp, Wednesday at noon, and proceeded all the way to a cemetery nearby.