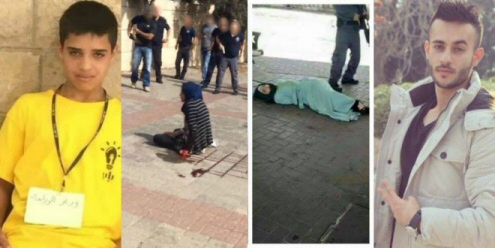 Videos and photos related to the violations committed by Israeli forces, police officers and settlers against the Palestinian civilians, have been surfacing on social media. These incidents have increased lately following the ongoing escalation in the occupied Palestinian territory (oPt) along with shooting incidents and employment of excessive lethal force in confronting protests.In some cases, Israeli forces claim that shootings or other practices were carried out in response to the Palestinians’ attempts to stab Israelis. However, the videos and photos showing the employment of excessive force reflect shooting-to-kill policy in violation of the international standards.

The Palestinian Center for Human Rights (PCHR) established this section, which includes some videos and photos published in social media mainly by activists or persons that were present in the scenes or even by Israeli police officers, who captured them with their smart phones.

PCHR aims to contribute to the dissemination of the international law violations committed by Israeli forces and settlers against the Palestinian civilians and their property.

Israeli police officers opened fire at 19-year-old Fadi ‘Aloon from al-Isawiya h village in Jerusalem and killed him in cold blood from a close range while chasing him by settlers under the pretext of stabbing someone.

Video of 13-year-old Ahmed al-Manasrah wounded to the head, lying on the ground and surrounded by Israeli police officers, who did not offer him help, while some Israeli settlers were swearing at him and crying “Die”.

Video showing how Israeli police officers opened fire at 21-year-old Esraa’ ‘Abed from Nazareth and seriously wounded her in a bus station in al-‘Afoulah in Israel under the pretext of trying to stab an Israeli.

Israeli forces killed 16-year-old Marah al-Bakir from Jerusalem and wounded her when she was on her way back from the school in al-Sheikh Jarah neighborhood under the pretext of attempting to stab a settler.

Israeli forces maltreated the family of a Palestinian civilian in Silwan village in Jerusalem while demolishing the family house.