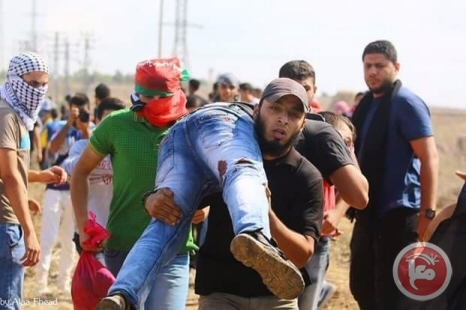 A 24-year old Palestinian was shot in the head and killed, while at least 27 others were injured after Israeli occupation forces fired at demonstrators in the Gaza Strip on Friday.Ashraf al-Qidra, Gaza’s Ministry of Health spokesman, said that Yahia Abdul-Qader Farhat, aged 24, from the neighborhood of al-Shujaiyya in Gaza, was killed during demonstrations in the north of the Gaza Strip.

He was taken to the al-Awda hospital in Jabalia, but succumbed to his injuries, according to PNN.

Mahmoud Hatem Hmeid, 22, was identified by Ma’an as the second victim. He was killed in northern Gaza.

Demonstrations are ongoing in the Gaza Strip, especially near the Erez and Nahal Oz crossings in the northern area.

Mushir al-Masri, a Hamas official, called upon all factions to take part in the “Intifada against Israel”. The leader of Islamic Jihad, Khalid al-Batsh, said the movement would remain “ready to strike the enemy’.

Last weekend, 12 Palestinians were killed in Gaza by Israeli occupation forces, including a two-year-old girl and her pregnant mother, who were killed in an airstrike.