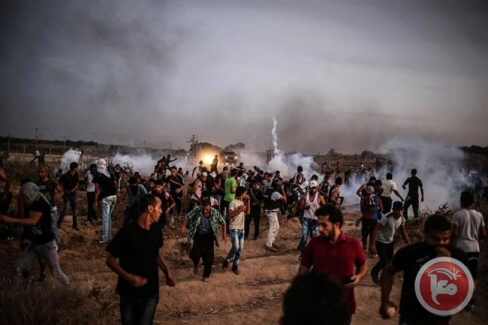 Israeli forces have announced heavier deployments at the border area with Gaza, following the announcement of a Hamas-prompted ‘Day of Rage’ planned for Friday, an Israeli army spokesperson said.The spokesperson said, according to Ma’an News Agency, that Israeli authorities undertook a ‘situational assessment’ following increased clashes and upheaval along the Gaza border area and have decided to deploy two more battalions along the Strip for Friday’s so-called ‘Day of Rage’.

Clashes have been frequent along the border fence recently, as Gazans have planned protests in solidarity with demonstrations in the occupied West Bank and East Jerusalem.

Since the start of October, Israeli authorities have reported multiple breaches at the border fence during clashes, while Israeli forces have shot dead at least nine Gazans at the protests.

Additionally, the spokesperson said that Israel authorities announced that two battalions and two companies of Israeli troops would be deployed in the occupied West Bank.

Hamas deputy head Ismail Haniyeh, on Thursday, visited Palestinians at al-Shifa hospital who had been shot and injured by Israeli forces during recent clashes near Gaza’s border with Israel.

‘The message of our wounded is that Gaza, despite the distance and its deep suffering due to the siege and war, still stands behind the battle of Jerusalem, and that Gaza is in the heart of Jerusalem’s Intifada,” he said.

Since the beginning of the month, Israeli forces have killed 32 Palestinians across the occupied Palestinian territory and Israel,with at least 17 shot dead at demonstrations.

Over 360 Palestinians have been shot with live fire, 932 with rubber-coated steel bullets, and 2,365 have been injured by tear gas in daily protests across the West Bank and Gaza, according to the Red Crescent.