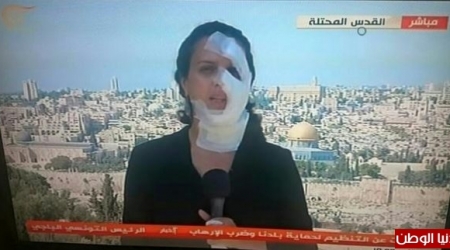 The Government Media Office (Ministry of Information) documented 62 Israeli violations against the Palestinian journalists during the recent uprising, which has occurred since the beginning of October.The office explained, in a press statement, that Israeli forces have suppressed Palestinian journalists with live, rubber and metal bullets, stun grenades and tear bombs, as well as their detention, beating and the prevention of their media coverage.

Al Ray reports that the GMO has strongly condemned these violations which occured during media coverage in Jerusalem and the Gaza Strip.

The statement applauded Palestinian journalists’ efforts in the media coverage to keep up with the recent news, calling them to exert more efforts to expose Israeli crimes.

In the same context, the office denounced the international silence regarding such violations, the systematic Israeli plan to keep them away from their media work, and stop them from disclosing Israeli propaganda.

These organizations must practice pressure on Israel to immediately release all journalists and media workers detained in Israeli jails.

The office has also called the national committee to follow up the issue of Israeli crimes committed against Palestinian journalists before the International Criminal Court, and to place it among top priorities, in order to hold the Israeli occupation accountable for its repeated violations.

The GMO welcomed the efforts of international organizations concerned with journalists to ensure the freedom of the media work, free of obstacles, calling them to shoulder their responsibilities and to adopt bolder positions to restrain the continued violations.

Concluding the statement, the Governmental Media Office underlined the necessity to cancel Israeli membership in the international media and human rights organizations, to stop it from persisting the crimes and ensure that these violations will not go unpunished.