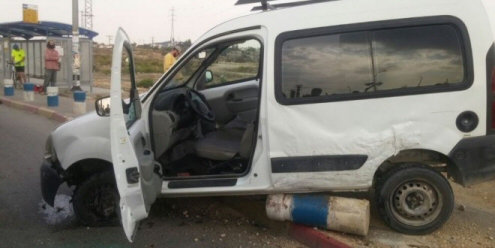 A Palestinian man was shot dead, Tuesday afternoon, after his car ran into a soldier and a civilian.The incident happened at the Gush Eztion Junction toward Jerusalem in the West Bank, according to PNN. Israeli media has reported that the car smashed into the two pedestrians before hitting a concrete barrier.

It was alleged that he got out of the car with a knife in his hand, before a soldier from the Kfir Brigade opened fire, shooting him fatally in the head.

Magen David Adom paramedics that arrived at the scene treated a man aged about 20 and another aged about 30 who had been lightly wounded and took them to Hadassah University Hospital, Ein Karem.

It is the latest event in a surge of protest and violence between Israel and Palestine, which started on 1st October.

Thousands have been injured, and the current death toll is at 48 Palestinians (including ten children) and seven Israelis.

Gush Etzion was originally a small group of settlements established in the 1940s which then later became part of the UN 1947 partition plan for a Palestinian state.

Israeli militias, however found it was an excellent location to intercept Arabs moving between Jerusalem and Hebron, and fought fiercely.

This, however, led to the practice of attaching the name Gush Etzion to areas that had no connection to the original group of settlements.

The land grab continues to the present day. Gush Eztzion is now 30 times bigger than the original area, and the establishment of the Guish Etzion Regional council meant the Israeli courts supported thousands of acres of privately owned Palestinian land being declared “state land” which was then built on by settlers.

At the end of last year, 1,200 acres to both the south and west of Bethlehem were also declared “state land” in order to create an Israeli axis that would connect the eastern settlements of Gush Etzion to the Green Line.

The move is expected to significantly increase the number of Israeli settlers in the area.