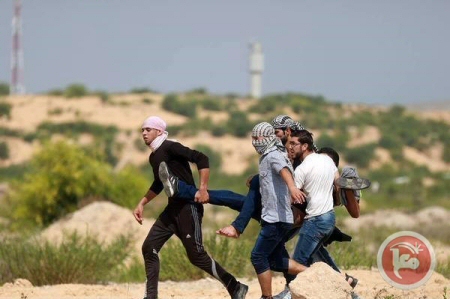 Israeli forces shot and killed a Palestinian, and injured nine others with live fire on Tuesday, during clashes on the border of the northern and central Gaza Strip, a medical official said.Ashraf al-Qidra, spokesperson for the Ministry of Health in Gaza, said Ahmad al-Sarhi, 27, was shot dead east of the al-Bureij refugee camp. Six others were injured with live fire.

In northern Gaza, eight Palestinians were injured near the Erez crossing. Three Palestinians were shot and injured with live fire and five others suffered injuries from tear gas, at least one of which was hit with a tear gas canister.

Israeli authorities closed the Erez crossing following the clashes, according to Ma’an.

The spokesperson could not immediately confirm how many Palestinians were shot or their condition.
On Friday, two Palestinians were killed and at least 100 others injured as Israeli forces opened fire at demonstrators in the Gaza Strip.

A week earlier, 12 Palestinians were killed in Gaza by Israeli forces, with 10 shot dead during demonstrations at the border and two killed, a two-year-old girl and her pregnant mother, in an airstrike.