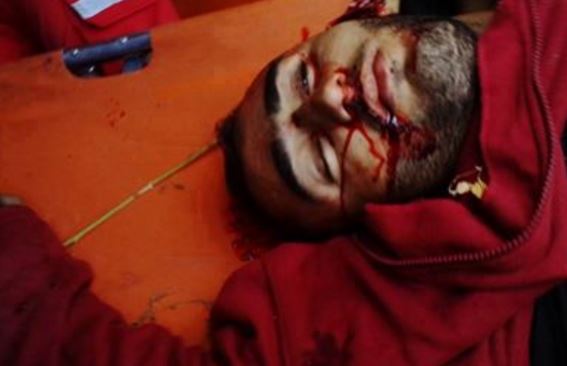 The sources added that a soldier shot al-Masalma in the back of his head from a very close distance, and that the bullet exited through his face.

The Israeli army claimed al-Masalma was shot dead ‘after attempting to stab a soldier,’ during what the soldiers described as ‘a violent riot in the town,’ and added that a soldier was mildly injured in the incident.

His family denied the military claims, and said, as confirmed by the Health Ministry, that their son was shot in the back of head from a very close range, in addition to the several live rounds the soldiers fired on his legs.

Clashes took place in the town prior to the fatal shooting of the young Palestinian, and the soldiers fired several live rounds, rubber-coated steel bullets and gas bombs, causing scores of Palestinians to suffer the effects of tear gas inhalation.

The fatal shooting of al-Masalma brings the number of Palestinians killed since the beginning of this month to 47, including a political prisoner who died of medical neglect by the Israeli Authorities.

The Palestinian Health Ministry said, among the slain Palestinian, are ten children, the youngest was only 16 months of age, and the oldest of them 17 years old.

Eight of the children were killed in the West Bank, and two in the Gaza Strip.

It added that 32 Palestinians have been killed in the West Bank, and 14 in the Gaza Strip, including a mother and her infant, while one was killed in the Negev.

Shortly after midnight, Israeli soldiers demolished the apartment of detainee Maher Hamdi al-Hashlamoun, in the Zeitoun area, south of Hebron, after surrounding the entire apartment building, and forcing the families out.

Al-Hashlamoun was taken prisoner on November 10, 2014, and was sentenced to two life terms and a fine of nearly 4 Million New Israeli shekels, after an Israeli court convicted him of killing an Israeli settler woman, and wounding two other settlers.

One of the kidnapped in Nablus is Ramez Oleiwy, the brother of Ragheb who is imprisoned by Israel, accused of killing a settler and his wife near Beit Forik town.

The soldiers told the family they intend to demolish their home.