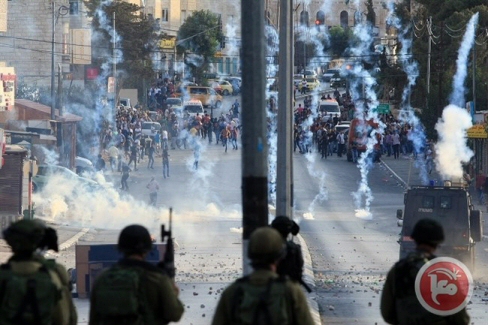 Israeli forces shot and injured at least nine Palestinians with live fire on Tuesday during clashes across the occupied West Bank, medics and witnesses said.A reporter in al-Bireh in the central West Bank district of Ramallah, near the Beit El settlement checkpoint, said three Palestinians were injured with live fire and eight with rubber-coated steel bullets, while several others suffered from severe tear gas inhalation during clashes that erupted in the city on Tuesday.

Israeli forces reportedly raided a gas station near the clashes and opened fire from inside the store.

When the station’s manager, Ayman al-Jamal, objected to the soldier’s presence, and asked them not to open fire from inside the gas station, an Israeli soldier allegedly pointed his gun and threatened him.
Meanwhile, the student council of the Al-Quds Open University in Ramallah suspended classes for the day and organized a sit-in demonstration inside the university campus to protest Israeli crimes and violations against Al-Aqsa Mosque.

After the sit-in, students marched to join the clashes.

In Nilin village, west of Ramallah, two Palestinians were injured with live fire, one in the side of the head and another in the thigh, during clashes in the village, a reporter on the scene said.
The injuries were reported as moderate.

The clashes in Nilin erupted between Palestinian youths and Israeli forces, after Israeli forces entered the village and closed its entrances.

Israeli soldiers used live and rubber coated steel bullets ‘heavily’ during the clashes, witnesses said.
In Bethlehem, five Palestinians were injured with live fire during clashes with Israeli soldiers at the northern entrance of the city, medical sources said.

The director of the ambulance and emergency department of the Red Crescent in Bethlehem, Muhammad Awad, told Ma’an News Agency that five Palestinians were injured with live fire, adding that four of them were hit in the lower legs and one in the thigh.

Awad said that ambulances evacuated the injured to Beit Jala hospital for treatment, and reported their injuries as moderate.

The UN Office for the Coordination of Humanitarian Affairs reported that the second week of October saw the highest number of Palestinian deaths and injuries in the West Bank and Israel recorded in a single week since 2005.

The UN High Commissioner for Human Rights said last week that ‘the high number of casualties, in particular those resulting from the use of live ammunition by Israeli security forces, raises concerns of excessive use of force, and violations of the right to life and security of the person.’
While the Israeli leadership attributes the escalation in violence to Palestinian incitement, most Palestinians have pointed to the decades-long Israeli military occupation as the root cause of recent events.

Israeli forces also took 17-year-old Ahmad Mazin al-Karaki from his home in southern Hebron, while Sadiq Mahmoud Siyaj was detained from his home in the al-Bassa neighborhood, security sources said.

Musab Shahir al-Bakri was also taken from his home in Hebron.

Local sources said that Israeli forces also stormed the home of Fadil Qawasmi, a teenager who was shot dead by an Israeli settler in Shuhada Street, in Hebron’s Old City, on Saturday.

The settler alleged that Qawasmi was attempting to stab him, although the settler was uninjured and witnesses disputed the Israeli army’s version of events.

Locals said that the raid on Tuesday morning was probably in preparation for a home demolition, as Israeli soldiers took photos inside the building.

Meanwhile, in Nablus in the northern West Bank, locals said that Israeli forces detained at least 12 Palestinians and gave a demolition order to the family of prisoner Raghib Ilewi, who Israel accuses of involvement in the shooting of an Israeli settler and his wife earlier this month.

Four young Palestinian men were detained in the village of Tuqu east of Bethlehem in the southern West Bank, local sources said.

They were identified as 16-year-old Luay Habis Dakhlallah al-Omour, his brothers Muhammad, 19, and Bilal, 24, as well as Muhammad Ibrahim al-Omour, 21.

An Israeli army spokesperson confirmed a total of 35 detentions. She said that Israeli Border Police detained one Palestinian in Jenin, five in Ramallah, two in Jericho, four in Bethlehem, and seven in Hebron.

She said the army detained an additional 15 Palestinians in Nablus district alone. All the detentions were for ‘suspected illegal activity,’ she said.

The Palestinian Authority Committee for Prisoners’ Affairs said last week that Israeli forces had detained more than 650 Palestinians since the beginning of October, most of them younger than 20 years old.

The committee said in a statement that most of the Palestinians were detained during clashes with Israeli forces, or subsequently in overnight raids on the pretext of resisting Israeli soldiers.