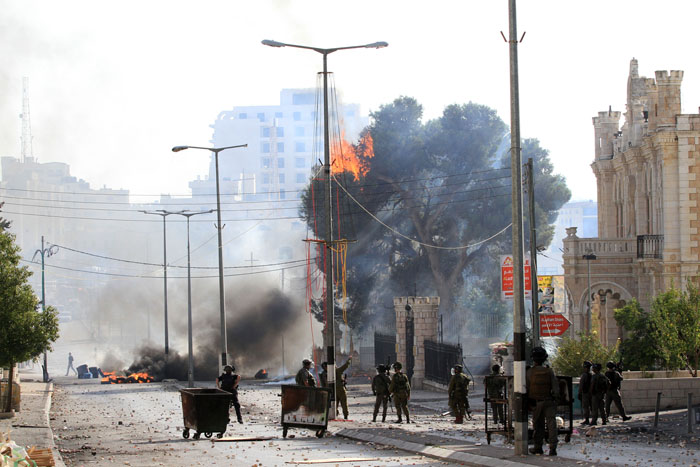 On Wednesday afternoon, Moa’taz Attalah Qassem, 22, was shot dead by Israeli soldiers outside the illegal Israeli settlement of Adam, near the town of Jaba’ north of occupied Jerusalem. He is From Eazaryia town near Jerusalem.

Qassem was shot dead after allegedly he tried to stab two Israeli soldiers on the Jaba’ roundabout just outside the illegal settlement.

According to witnesses the man was shot with multiple live rounds to the head and abdomen while another youth standing near the incident area was arrested by Israeli soldiers and taken to unknown location. The circumstances of Qassem death remains unknown.

Israeli troops closed down the road, which lead to the nearby city of Ramalalh and the northern part of the West Bank which lead to sever traffic.

Earlier on Wednesday midday, Hashem al-‘Azza, 54 years of age, from Tel Romeida neighborhood in Hebron old city, died of severe effects of tear gas inhalation, after dozens of soldiers invaded the Zawiya area in the city and clashed with local youth, Medical sources at the Hebron Governmental Hospital reported.

Medics rushed to the scene, and tried to stabilize his condition, before moving him to the hospital, where he died of the severe effects of tear gas inhalation.

In addition, a Palestinian was shot with a live round in the chest, during clashes with Israeli soldiers invading the Dowwara area, in Sa’ir town, north of Hebron.