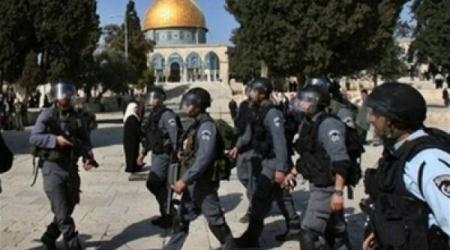 At the same time, a group of extremist Israeli settlers broke into Al-Aqsa Mosque from the Moroccan Gate, guarded by the Israeli police.

A state of cautious calmness prevails over the Al-Aqsa Mosque yards, amid heavy deployment of police and special forces around the gates, with tightened restrictions imposed on worshippers’ enterance to the mosque.

The invasion was confronted by Palestinian worshippers who had been in the mosque since early morning, despite the restrictive siege imposed on Al-Aqsa.

Israeli forces stationed on Al-Aqsa’s gates had seized the IDs of worshippers entering into the mosque, where authorities continue to prevent dozens of women from entering the mosque.

In a related context, clashes erupted Wednesday between schools students and Israeli soldiers in Ras Al-Amood neighborhood, in Silwan, south of Al-Aqsa Mosque.

Eyewitnesses reported that soldiers fired stun grenades and tear gas bombs on the students. No injuries were reported.

Israeli authorities continue imposing a tight siege on the Jerusalem neighborhoods and villages, shut the entrances with concrete cubes, and erect checkpoints to searched the Palestinian passersby, as a part of the collective punishment policy imposed on them.