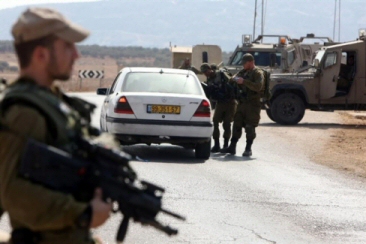 A Palestinian youth was shot and injured, Friday, after allegedly stabbing an Israeli soldier near the Gush Etzion settlement bloc, to the south of Bethlehem.The Israeli army said a soldier was stabbed during ‘operational activity’ in Gush Etzion, with the attacker shot on site.

Israeli media said the soldier was stabbed while overseeing access to agricultural land for Palestinians near an illegal settlement.

Both the Israeli soldier, reportedly a Bedouin, and the suspect were taken for medical treatment.
A Ma’an reporter identified the Palestinian as Musab Muhammad Ghneimat, 16, from the Hebron town of Surif.

The Mayor of Surif, Muhammad Ghneimat, told Ma’an that Israeli soldiers held farmers in the area and prevented them from reaching their lands.

On Thursday, one Palestinian was killed and one critically injured by Israeli police in Beit Shemesh, west of Jerusalem, after an alleged stabbing attack, Israeli media and police said.

The day before Israeli forces shot dead Palestinian Mutaz Atallah Qassem, 22, after he allegedly attacked an Israeli soldier near the illegal Adam settlement in the occupied West Bank.

Israeli forces also shot and killed a Jewish man in central Jerusalem, late Wednesday night, after mistaking him for a ‘Palestinian attacker’.

Over 50 Palestinians have been killed by Israeli forces since the beginning of the month, as rights groups condemn a ‘shoot to kill’ policy towards alleged attackers which has been described as ‘extrajudicial execution.’

At least nine Israelis have been killed in attacks during the same time period.

B’Tselem, last week, acknowledged that while Israeli forces have authority to use the minimal amount of force to ‘protect the public,’ ‘law enforcement officers cannot act as both judges and executioners.’