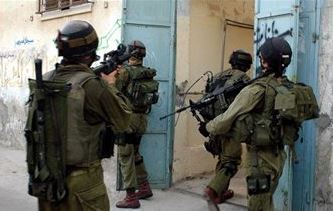 Three Palestinian teenagers have been kidnapped, on Sunday at dawn, by Israeli soldiers invading the al-‘Obeydiyya town, east of Bethlehem, while three others were summoned for interrogation. The army also kidnapped a Palestinian in Hebron after assaulting him.Local sources in the al-‘Obeydiyya said the soldiers stormed and ransacked several homes, and kidnapped Khaled Mohammad Radayda, 17, Hisham Nabil Radayda, 19, and Zeidan Ahmad ash-Shayeb, 15.

The soldiers cuffed the kidnapped Palestinians, and took them to the Etzion military base, south of Bethlehem, for interrogation.

In addition, soldiers assaulted and wounded a young Palestinian man, identified as Ahmad Sa’adi al-Heeh, 20 years of age, in the Old City of Hebron, in the southern part of the occupied West Bank, and kidnapped him.

On Saturday at night, soldiers invaded Zabbouba village, west of the northern West Bank city of Jenin, and clashed with dozens of local youths, wounding one child, while scores of residents suffered the effects of tear gas inhalation.