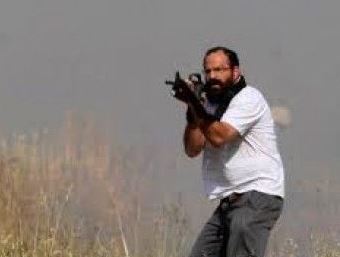 Palestinian medical sources have reported Sunday, that one resident suffered life-threatening wounds, and another suffered a light injury, after paramilitary Israeli settlers opened fire on Palestinians, picking olives in their orchard, near the southern West Bank city of Hebron.Kayed Jaradat, head of the Local Council of Sa’ir town, near Hebron, said a number of paramilitary Israeli settlers fired live rounds on the Palestinians, and attempted to abduct one of them.

Jaradat added that the Israeli assailants shot Azzam Ezzat Shalalda, 22 years of age, with at least four rounds, one in the neck, another in the abdomen and the rest in his legs.

Jihad Shawar, head of the Al-Ahli Hospital in Hebron, said the wounded Palestinian was instantly moved to the surgery ward.

On Sunday morning, a paramilitary Israeli settler was moderately injured after being stabbed, close to the entrance of Metzad colony, in the Gush Etzion settlement block.

According to Israeli Ynetnews, the settler, 58, was hit in the head after stones were hurled on his car, and that he pulled over and left his vehicle, ‘before a Palestinian dressed as an ultra-Orthodox man stabbed him in the chest.’

It added that the settler then ‘opened fire on the attacker and wounded him, but he managed to escape towards Sa’ir.’
The army initiated a search campaign in the Sa’ir, and that one soldier was lightly wounded with a stone thrown at him during clashed with Palestinian protesters.

On Sunday at dawn, the army kidnapped three Palestinian teenagers in the al-‘Obeydiyya town, east of Bethlehem, and summoned three others for interrogation, and also also kidnapped a Palestinian in Hebron after assaulting him.

On Saturday at night, soldiers invaded Zabbouba village, west of the northern West Bank city of Jenin, and clashed with dozens of local youths, wounding one child, while scores of residents suffered the effects of tear gas inhalation.