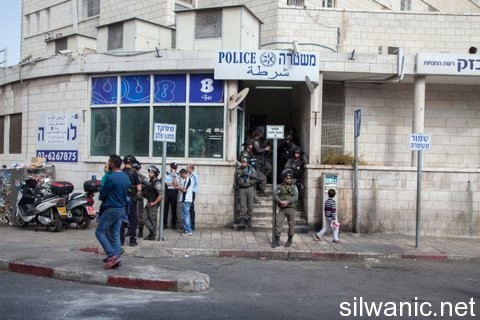 The soldiers also kidnapped a child, identified as Majd Kamal al-‘Awar, 15 years of age, from his family’s home in Silwan.

Another child, identified as ‘Omar Khalil Abu al-Hawa, 16, was also kidnapped from his home, in the at-Tour town.

In addition, a teenager identified as Farid Khalil ‘Obeid, 18, was kidnapped from his home in the al-‘Isawiyya town.

The army also invaded homes in Silwan, and handed summoned several Palestinians for interrogation. Three of them has been identified as Ahmad Jalal al-‘Awar, 19, his brother Bilal, 21, and ‘Aaed Khalil ‘Obeisan.

It is worth mentioning that Israeli soldiers have kidnapped at least 22 Palestinians, in different parts of occupied Jerusalem, in less than 48 hours.

In related news, Israeli fanatics infiltrated Um Touba village, south of Jerusalem, and burnt a Palestinian car, in addition to writing racist graffiti, including “Death To Arabs” and ‘Revenge.’