Jerusalemite Forced to Demolish Own Home by Israeli Authorities 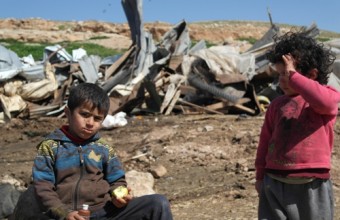 Israeli forces enforced, on Saturday evening, the Al-Rajjbi family to demolish their home in the Beit Hanina neighborhood, to the north of Jerusalem, by their own effort, in order to implement the municipality court decision, and under the usual pretext of building without a permit.Jerusalem’s Wadi Hilweh Information Center reported, according to Al Ray, that the occupation municipality had given a time limit for demolishing the home and, in case of not implementing the decision, the municipality crews were to demolish it, with a financial penalty of 60,000 shekels incurred by the family for demolition costs.

Mrs. Al-Rajjbi said that eight members live in the home, including: (Abeer Al-Rajjbi, her husband, five children aged between 18-6 years old). The home was built 15 years ago, on an area of 100 square meters.

Al-Rajjbi pointed out that, in years past, they tried to obtain a license to build the house, but only in vain, under the pretext that the building was established on street sides.

The Israeli municipality had imposed fines on the family up to 250,000 shekels, in addition to the costs of lawyers and engineer crews, in the family’s attempt to keep their home.

According to UN statistics, Palestinians now make up the largest refugee population in the entire world.