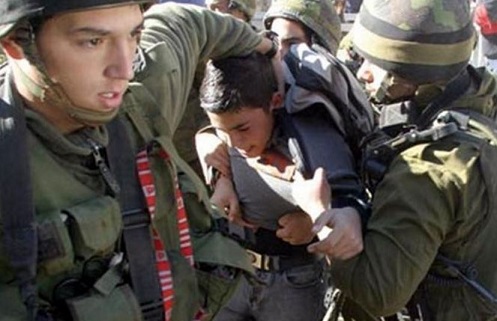 It added that 55% of the kidnapped Palestinians are children, between the ages of 12 and 17, while approximately 200 of them are from Jerusalem.

The number of female prisoners held by Israel is 36, including a few who were wounded prior to their arrest, and are now in Israeli hospitals.

It said that shooting residents after their arrest, and after they have been completely subdued, is a direct violation of all international laws and regulations, including the Rome Rome Statute, and the principles of the International Criminal Court.

In addition, the Committee said that all detained Palestinians have been beaten and assaulted, in addition to being subject to verbal abuse while many were attacked by military dogs that were let loose on them.

Many detainees suffered serious wounded after being beaten with batons, or kicked and punched, while many were left without any medical attention.

Some of the wounded Palestinians died due to the lack of adequate and urgently needed medical attention.

Several Palestinians have been kidnapped for expressing their opinions on their social network accounts, and are facing what Israel calls “incitement charges,” while many Israelis, including officials, who call for killing Palestinians or describe them as snakes, as well as many other outrageous comments and posts remain at large.

Many Israeli officials, including the “Education Minister,” have even called on the Israelis to carry arms and shoot to kill.

Many Palestinians have been imprisoned under Administrative Detention because of their opinions and posts on social network sites.

Some of the recent decisions by the Israeli government allow imposing prison terms as high as twenty years against Palestinians, including children, believed to be behind attacks against Israelis, including stone throwing and Molotov cocktails.

Israeli also authorized the use of sniper fire against protesters, escalating the demolition of homes, and even denying the transfer of the bodies of slain Palestinians to their families.

The PPS said that, on Monday at night and Tuesday at dawn, Israeli soldiers have kidnapped 44 Palestinians in different parts of the occupied West Bank, including Jerusalem.

It added that twenty of the kidnapped Palestinians were taken prisoner in the southern West Bank district of Hebron.

|>Four Palestinians, Including Two Sisters, Kidnapped In Hebron And Bethlehem|

The Committee also stated that the Israeli soldiers have kidnapped seven Palestinians from Jenin, in the northern part of the West Bank.