Four Palestinians, Including Two Sisters, Kidnapped In Hebron And Bethlehem 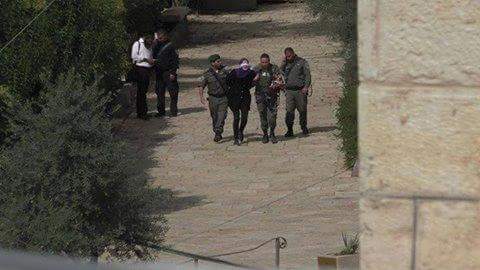 Four Palestinians, including two sisters, have been kidnapped, Tuesday, by Israeli soldiers in the southern West Bank district of Hebron, and in the West Bank district of Bethlehem.The soldiers kidnapped Jihan Hatem Abdul-Aziz Erekat, 17, and her sister Noura, 21 years of age, after searching them on an electronic gate leading to the Ibrahimi Mosque, in Hebron City.

The Israeli army claimed the two refused to be searched, and that the soldiers arrested them after “finding knives in their bags.”

The sisters are from the al-‘Ezariyya town, east of Jerusalem, the Hebron News has reported.

In addition, Israeli soldiers kidnapped Moayyad Abdul-Aziz al-Barrawi, 17 years of age, from his home in Yatta town near Hebron, and searched a home belonging to Khaled Shamessly, causing property damage.

Also, soldiers installed a sudden roadblock on the western entrance of Beit Fajjar town, south of Bethlehem, and kidnapped one Palestinian identified as Mohammad Yosri al-Hroub, 20 years of age.

Also on Tuesday at dawn and late on Monday at night, soldiers invaded several communities in the northern West Bank districts of Jenin and Nablus, and kidnapped five Palestinians, while many were injured in Jenin.

On Monday evening, Israeli soldiers kidnapped five young Palestinians, including a 13 year old child, after storming and searching their homes, in occupied Jerusalem, and summoned several others for interrogation.