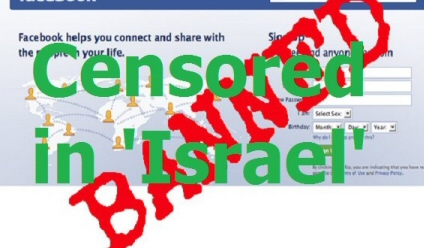 According to the Israeli media, 20.000 Israelis joined the Israeli NGO Shurat HaDin – The Israeli Law Center on a civil lawsuit against Facebook on accusations of ignoring widespread Palestinian posts ‘calling for violence against Jews.’The suit was filed this last Monday, in the New York State Supreme Court in Brooklyn, by three attorneys — Robert Tolchin of New York; Nitsana Darshan-Leitner, the director of the Shurat HaDin – Israel Law Center, and Asher Perlin of Fort Lauderdale, Florida.

PNN reports that, according to The Times of Israel newspaper, the 20,000 Israeli plaintiffs claim that the Facebook posts have inspired many recent “terror attacks” and that “Facebook’s algorithms and platform connects inciters to terrorists who are further encouraged to perpetrate stabbings and other violence attacks against Israelis”.

The suit alleges that Facebook has a “legal and moral obligation” to block much of this content but that it chooses not to. The plaintiffs are seeking an injunction against Facebook requiring the social network to “immediately remove all pages, groups and posts containing incitement to murder Jews; to actively monitor its website for such incitement that all incitement is immediately removed prior to being disseminated to masses of terrorists and would-be terrorists; and to cease serving as matchmaker between terrorists, terrorist organizations, and those who incite others to commit terrorism.”

They are also arguing that Facebook is “far from a neutral or passive social media platform and cannot claim it is a mere bulletin board for other parties’ postings” and that “the terrorists do not come on their own; they write posts and encourage their friends to kill Jews,” Israeli attorney Nitsana Darshan-Leitner, director of Shurat HaDin, told Fox News. “Facebook has been transformed into an anti-Semitic incubator for murder.”

According to the israeli newspaper Haaretz, in a news release Darshan-Leitner also state that “Facebook wields tremendous power and this publicly traded company needs to utilize it in a way that ensures that Palestinian extremists who are calling to stab Israelis and glorifying the terrorist that do, are not permitted to do it on its platform.”