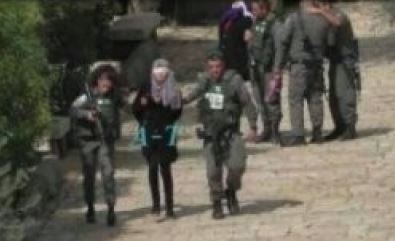 The Palestinian Prisoners Society (PPS) has reported, late on Tuesday, that the Israeli army has decided to release a young woman, but to keep her teenage sister detained, after initially claiming they both carried knives in their bags.The PPS said Noura Hatem Abdul-Aziz Erekat, 21, will be released, while her sister, Jihan, 17, will remain in custody to face trial at the Ofer Military Court, next Thursday.

The two sisters, are from the al-‘Ezariyya town, east of Jerusalem, they were kidnapped on Tuesday at noon, near the Ibrahimi Mosque, in the southern West Bank city of Hebron.

On Tuesday at night, several army vehicles invaded Deir Estia town, northwest of the central West Bank city of Salfit, and fired flares in addition to provoking many Palestinians; the invasion did not lead to clashes, injuries or arrests.

The Palestinian Detainees’ Committee has reported, Tuesday, that the number of Palestinians, including children, who have been kidnapped by Israeli soldiers since the beginning of this month has arrived to 1083; 44 of them kidnapped on Tuesday.

In related news, the Palestinian Detainee’ Committee (PPS) has reported that around 143 Palestinians have been injured by Israeli army fire, Tuesday.

On Tuesday evening, soldiers shot and killed two Palestinians near the Gush Etzion junction, north of Hebron, and one Palestinian in Hebron city. The soldiers also kidnapped a child, 11 years of age, and a young man, near Hebron.