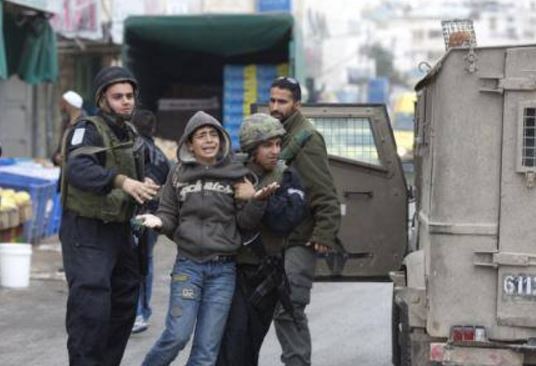 Israeli soldiers have kidnapped, on Wednesday at dawn, thirteen Palestinians, including two women and five children, after invading and searching their homes, in different part of occupied Jerusalem.The Wadi Hilweh Information Center in Silwan (Silwanic) in Jerusalem said the soldiers kidnapped Jihad al-Ghazzawi, from her home in Ras al-’Amoud in Silwan, south of the Al-Aqsa Mosque.

Al-Ghazzawi has been previously repeatedly detained, fined and denied access to the Al-Aqsa Mosque, for countering invasions by Israeli extremists into the holy site.

The Israeli Police kidnapped another woman, identified as Ghada Odetallah, 42, from Shu’fat neighborhood in the center of Jerusalem, after interrogating her in their station in Neve Yaakov illegal colony, built on Palestinian lands in Beit Hanina, north of Jerusalem. Odetallah is a married mother of five children, Silwanic said.

On Tuesday at night, the Israeli army and a number of related media agencies published a picture of Odetallah, claiming she intended to carry out an attack.

In addition, soldiers kidnapped four Palestinians after invading their homes in Hizma village, northeast of Jerusalem.

In related news, dozens of invaded various, on Wednesday at dawn, several parts of the southern West Bank district of Hebron, and kidnapped 26 Palestinians from their homes, after searching them, and two in Bethlehem.

On Wednesday at dawn and Tuesday at night, soldiers kidnapped four Palestinians in the West Bank districts of Ramallah and Nablus.