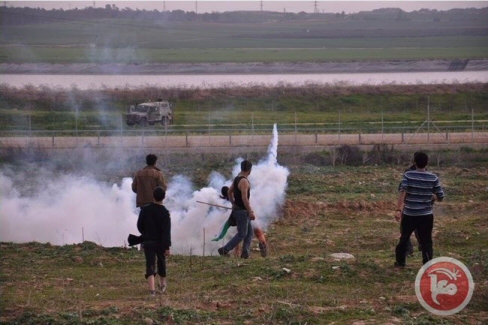 Spokesperson of the Gaza Ministry of Health, Ashraf al-Qidra, said that 17 Palestinians were injured by live fire including a youth hit in the foot during clashes near the Erez crossing in the northern Gaza Strip.

A medic was also injured in the hand when Israeli forces targeted a Palestinian Red Crescent ambulance with live fire in the al-Farrahin area in eastern Khan Younis.

The injured were taken to nearby hospitals.

Locals told Ma’an News Agency that the demonstrations erupted in protest of the recent killing of Palestinians by Israeli forces in occupied East Jerusalem and the West Bank, as well as in support of an intifada.
An Israeli army spokesperson said that ‘throughout the day several riots took place on the Gaza border,’ adding that hundreds of Palestinians attempted to ‘breach the security fence.’

The spokesperson said that Israeli forces opened fire ‘in order to stop infiltration that would gravely endanger the safety of communities nearby.’

Demonstrations in solidarity with Palestinians across occupied Palestinian territory have taken place in the besieged strip on a weekly basis this month.

At least 15 Gazans have been killed by Israeli forces during the demonstrations.

Two Palestinians, a two-year-old and her pregnant mother, were also killed in an Israeli airstrike on their home this month.

An Israeli army spokesperson had no reports of shelling, but said that Israeli naval forces fired warning shots into the air when vessels ‘breached a fishing zone in the northern Gaza Strip,’ adding that the vessels turned back after the warning shots.

Friday’s events came after a leader of Hamas — the governing political power in the Gaza Strip — said Tuesday that the Palestinians need a national strategy to ‘protect and escalate’ what it termed the ‘Jerusalem uprising.’

Ismail Haniyeh said from Lebanon that the recent upsurge in resistance had ‘shuffled the cards and hit defeatists.” He also criticized international negotiations for ‘providing cover to the Israeli occupation.’

Ongoing violence has left at least 65 Palestinians and nine Israelis dead since the beginning of the month.