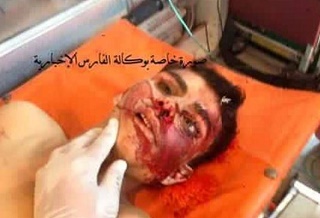 Israeli soldiers shot and killed, earlier Saturday, a Palestinian teenager in the al-Jalama Israeli military roadblock, north of Jenin, in the northern part of the occupied West Bank.Eyewitnesses said the soldiers fired several rounds of live ammunition on the child, inflicting several serious gunshot injuries, causing him to die of his wounds later.

The Red Crescent Society in Jenin said the soldiers prevented its medics from reaching the seriously wounded teen, and left him to bleed, before dragging his body behind the main gate of the military terminal.

The army completely sealed the terminal from both directions, and an hour later said the Palestinian died of his wounds.

The slain Palestinian teen has been identified as Mahmoud Talal Abdul-Karim Nazzal, 18, years of age, from Qabatia town, south of Jenin. The army later handed his body to Red Crescent Society medics.

The Israeli claimed the Palestinian attempted to ‘stab a soldier on the roadblock, before another soldier shot him dead.’

Despite Israeli claims of a widespread wave of ‘knife attacks’ by Palestinians against Israelis, many of the alleged knife attacks were later disproved by video evidence and eyewitness accounts.

There have also been several proven incidents of Israeli soldiers planting knives on the bodies of Palestinians they had killed.

The soldiers clashed with local youths, and fired gas bombs and concussion grenades.

On Friday, October 30, the Israeli army transferred the body of slain child Ahmad Mohammad Kamil, who was shot dead by army fire on the same roadblock, last Saturday, October 24th. Kamil is from Qabatia town, near Jenin.

On Friday, October 30, the soldiers killed three Palestinians, including a baby who suffocated from Israeli tear gas in Bethlehem, a day after Israeli forces tore through a Bethlehem neighborhood shouting We will gas you all to death.