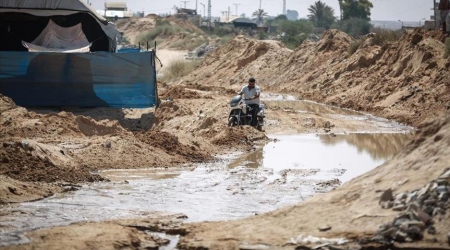 For the second time in recent weeks, Egyptian authorities flooded the area along the border with Gaza with water, to destroy underground tunnels between Sinai and the Palestinian territory.A Palestinian source told Anadolu Agency, according to Al Ray, that many tunnels were flooded with sea water in six areas in southern Gaza.

The Egyptian army had built large pipelines along the border with the Gaza Strip and began flooding the area with seawater in September in an effort to destroy a network of underground tunnels between the Palestinian territory and the Sinai Peninsula.

Blockaded by Israel since 2007, Gaza used to receive much-needed supplies through the network of smuggling tunnels on its border with Egypt’s Sinai Peninsula.

Since the 2013 military coup against President Mohamed Morsi, Egyptian authorities have cracked down on the tunnels.

Last year, Egyptian authorities began to establish a buffer zone in North Sinai’s city of Rafah along the border with Gaza following a spate of militant attacks against army and police forces.